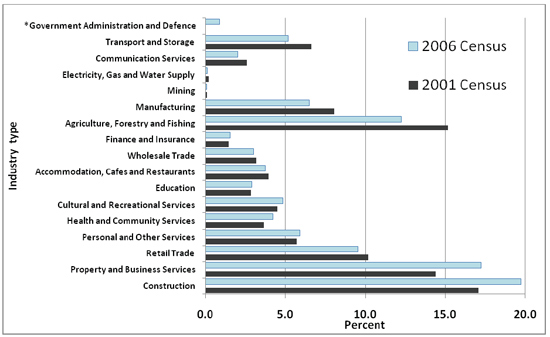 Source: Statistics New Zealand’s Census of Population and Dwellings, 2001 and 2006.

*These figures use data for the employed working age population only, i.e. people 15 years of age and over. The percentage of Māori entrepreneurs involved in the government administration and defence industry in 2001 is not available because of Statistics New Zealand’s data confidentiality rules applied to low numbers.

1 = Entrepreneurs are defined in this report includes: Māori employers and Māori self-employed and without employees.
2 = ANZSIC is the Australian and New Zealand Standard Industrial Classification.
The ANZSIC96 version used for this analysis is version 4.1.

17 Refer to appendix 1 (near the end of this report) to see the data behind graph 1).