When Mara Andrews (Ngāti Kahungunu, Ngāti Raukawa, Te Whakatōhea) was gifted the name for her company, it came with a message that her business would ‘go out, raise, and uplift our people.’

Sixteen years on, Kāhui Tautoko is a remarkable fulfilment of that vision and today is the only company of its kind with registered offices in Canada and the United States.

Filling a unique niche, Kāhui Tautoko has built itself a formidable reputation for the work it does providing advice to indigenous organisations and government agencies on indigenous development.  Health is a particular area of focus.

With humble beginnings in Aotearoa, the company has worked with communities and governments in Samoa, Tonga, the Cook Islands, Hawaii, Alaska, and throughout America and Canada.

Supporters - and there are many - describe the company as ‘one of those quiet, but revolutionary enterprises making it big on the global stage, a company we could all learn something from in terms of exporting our unique indigenous knowledge around the world’.

Today Mara says her company continues to strive hard to uphold the name and legacy gifted by kuia Mate Kaiwai. “To do quality work, to focus on respectful relations, to be reliable, to fix things when we haven’t quite got it right; to acknowledge our staff, their partners and whānau; to look after our clients; and keep our eye on the vision laid down for us.”

When we caught up with Mara she was in Orlando Florida attending a tribal self- governance conference.   She was connecting Native American and Alaska Native peoples with Māori health managers keen to learn more about health developments there.

“Some tribes here have been governing their own health for 20 or 30 years so they have a lot to teach us,” she says.

“Once a tribe takes over, they aren’t constrained by government prescription and auditing because they are treated as a sovereign government.  It allows them to be creative in areas like private health funding.   So Māori managers are looking at the innovations they’ve applied here.” 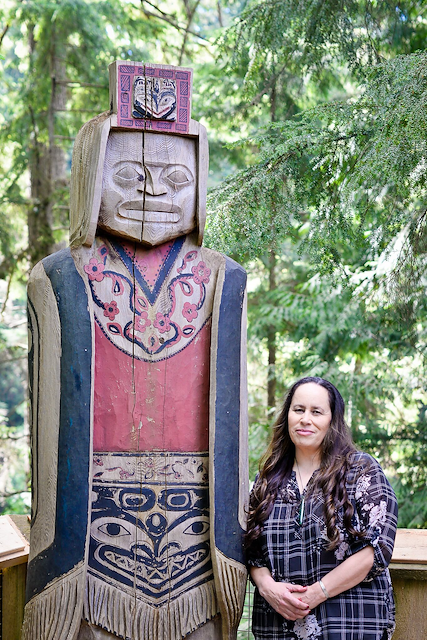 The company’s work with the Assembly of First Nations takes them across all 10 provinces - from British Columbia to Nova Scotia – and involves meeting with scores of First Nations communities across the country.

Staff clock up hundreds of kilometers often travelling by car, plane and small boat to reach remote locations.  On occasion they will be accompanied by a translator for communities that are fluent French speaking.

There are about 650 First Nations across Canada and multiple ones have their own treaties.

“That makes it complex and interesting because we have to get our heads around individual treaty frameworks for each nation – we can’t just work to one.

“I think people were initially testing us to see if we were legitimate about committing to them. We had to put a lot of time into building that trust, going to different community events - not because we were working - but to become part of their world.  After that, the door flew wide open to us.”

Being a unique Māori business

Mara says the company has had an interesting time with its name Kāhui Tautoko.

That observation was spot on.

“People have got to know us, they ask us how to pronounce our name and what it means.  They find it really interesting.  It certainly hasn’t stopped us getting work, it identifies us as a Māori business.”

“We keep our Māori identity because we are working with First Nations people and they want us to demonstrate that we are indigenous – and our name really does that.  It also reminds us we are visitors here and to respect the local Nations, their customs and their territories just as we would expect if they were manuhiri in our land.”

The company’s move to North America was instigated at the request of a First Nations GP visiting in 2007.    Impressed by what he saw, he invited Mara to Canada on the premise that “we need people like you.”

“When I arrived people were at a turning point and I was ready for change too.  I thought heck someone is handing you a gift so take it.”

Mara discovered that often each First Nations’ community has its own separate treaty and funding agreement, but not the people skilled to work in a government context.

Mara says they support First Nations people to overcome their intimidation of government, borne out of an oppressive history.

“Being placed on reservations and having their children taken away to residential schools under the Indian Act.  It has been very oppressive, especially for the older generation who are not comfortable questioning people in authority. Whereas for us at home it’s a case of ‘well bring it on’.

In many areas they see Māori as role models.  “The look at us and say ‘you people come over here, you speak your language and have your voice, you aren’t intimidated and you’re very confident.  They ask, ‘how did you become so strong’?”

Despite a demanding workload, Kāhui Tautoko remains a small and tight team.

Of the original Kāhui Tautoko team created in 2000, Mara is the only one remaining.   Marama Parore was her first business partner and over the years Caren Rangi, Piri Robinson and Careene Andrews have been involved as company co-Directors in New Zealand and Canada.

Three staff are located in Canada and two oversee the New Zealand operation.

The company operates as a virtual business with video conferencing as the most common means for communicating with clients in other countries and staff dialing in from New Zealand and Canada.

“If you’re working with indigenous people you can’t really be driven by making money.  I would be highly embarrassed if I was earning millions on their backs. I try to cover our costs and break even and if we accomplish that, then we’ve had a good year.

Advice from her accountants about profit margins, often falls on deaf ears.

“I say what the heck for?  I don’t focus on profit margins at the end of the year, I just care about being able to pay people, get home and buy clothes for my moko - who must have the flashest wardrobe in Murupara!”

So what advice does she offer this new and prospective Māori businesses?

“My advice is to stay optimistic even in the toughest times. You have to really believe in what you are doing and hold that optimism even in the toughest of times.  Keep telling yourself ‘I’m doing the right thing.  Surround yourself with trusted family, experts and advisors – and trust your own instincts. It is hard – there is no doubt.

“You have to make the tough decisions.  You rely on your true friends and learn how important whānau support is.  You always have to repay that support.  Reciprocity is a big part of Kāhui Tautoko and our philosophy, you have to acknowledge the people who help you. We try to reward staff and their whānau in different ways.”

She recalls kaumātua Rongo Wirepa telling her, ‘if you do the right thing, the money will come.  Don’t focus on the money, focus on your kaupapa’.  “That was such good advice.”

Mara’s formative years were spent growing up in Napier where her Mum and Dad still live.  On her Dad’s Ngāti Kahungunu side she’s from Tangoio 30 minutes north of Napier and on his Whakatōhea side from Opape near Ōpōtiki.

Her Ngāti Raukawa connection is to Ngatokowaru through the Nicholson whanau.   Her mother hails from southern England descended from the Williams and Carpenter families

Educated at Napier Girls’ High School and Hukarere Maori Girls College, Mara finished school and relocated to Palmerston North.  It was 1978 and she was preparing to chase her dream career and become the first woman to train as a pilot in the air force.

She aced the entrance test at the Ohakea Base, only to be told afterwards that women couldn’t train as pilots, but they could train as navigators.

With time to kill before her navigator training started, she got a job with the Department of Māori Affairs.  That was in 1978 and it was the catalyst for setting her on new and unexpected career path

“Once I got in I didn’t want to leave.  I guess I found myself and ended up in the Māori Land Court division working under good people who taught me a lot of different things.”

From the Māori Land Court she moved around the Department and then to the Māori Trust Office.

She attributes her career to some very good bosses who all had different styles – the late Star Renata, Dr. Tamati Reedy, Eddie Moses, Peter MacGregor, Neville Baker, Kara Puketapu, Kingi Smiler, and Wira Gardiner.   Others who gave her good advice were Dr Graham Scott, David Moore, and the late Rob Cooper.  Each in their own way taught her something.

The company’s first contract was with the Department of Corrections reviewing health services inside prisons.  “When they saw our report they ended up asking us to evaluate a whole of other programmes in the prisons – so we did a lot of Corrections work – and it just grew from there.”

She mentions kaumātua Te Maari Joe and Uncle Binny Andrews, “who keep us on track with our kaupapa and who tell us off when we are not.”

And despite success, her friends and work colleagues say it hasn’t changed Mara one bit.  “She’s still the same old person she’s always been – down to earth, staunch, full of laughter and always cracking jokes.” 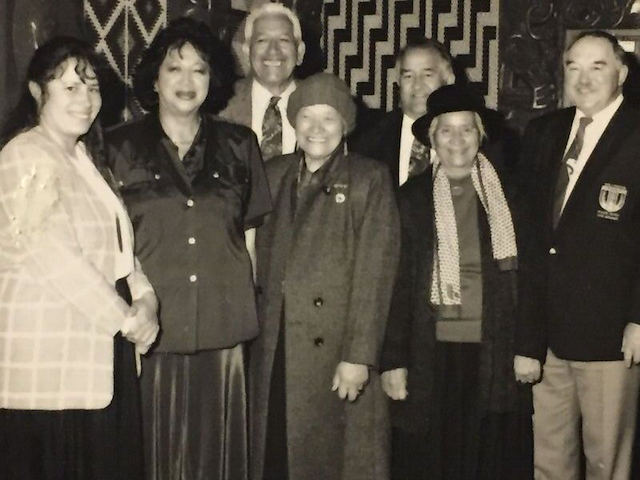 Others describe her as “incredibly loyal, smart, focused, hard working with a big heart and someone who never forgets her roots. She is one of those rare people who is just as comfortable sitting in the whare kai peeling spuds - as she is sitting at a table negotiating the health rights of indigenous people.”

And what of the future?   “I see a lot of potential here and I don’t want to walk away from it yet.  We are just scratching the surface in some things and I have seen some people getting stronger and getting far more confident in themselves.

“I want to see them stand up and not fear government, not fear change, not fear trying to do things differently and not fear using their own culture.”

She hopes Kāhui Tautoko can expand its work into Hawaii with the tangata whenua already expressing interest in using her expertise.

“New legislation will usher in changes to the health sector in Hawaii and I’d love to be part of that.  Hopefully that will be my next step.”

One day she hopes to come home to share her skills on boards and committees and completing her PhD on tribal governance and health care.