The transformation and impact has been massive. Our tamariki are really excited. The windows in their rooms and the holes in the floor will be fixed. There’s real excitement.”

Such has been the impact of new funding in the north for Māori housing.

The Sanderson whānau are part of a community housing repair project by Te Rūnanga o Whaingaroa in Kaeo, which will see them get long overdue repairs to their home.

Te Rūnanga o Whaingaroa received funding from the Māori Housing Network for two projects – housing workshops, aimed at equipping whānau with basic DIY skills to maintain their homes, and emergency housing and repairs. The Sanderson whānau are among the first to receive assistance.

“We’ve been living pretty hard lately. Most times when it rained you couldn’t drive up here. You’d have to walk uphill with your groceries and everything. So with a decent road like this we can get up here any day,” says Alex Sanderson, Ngāpuhi. 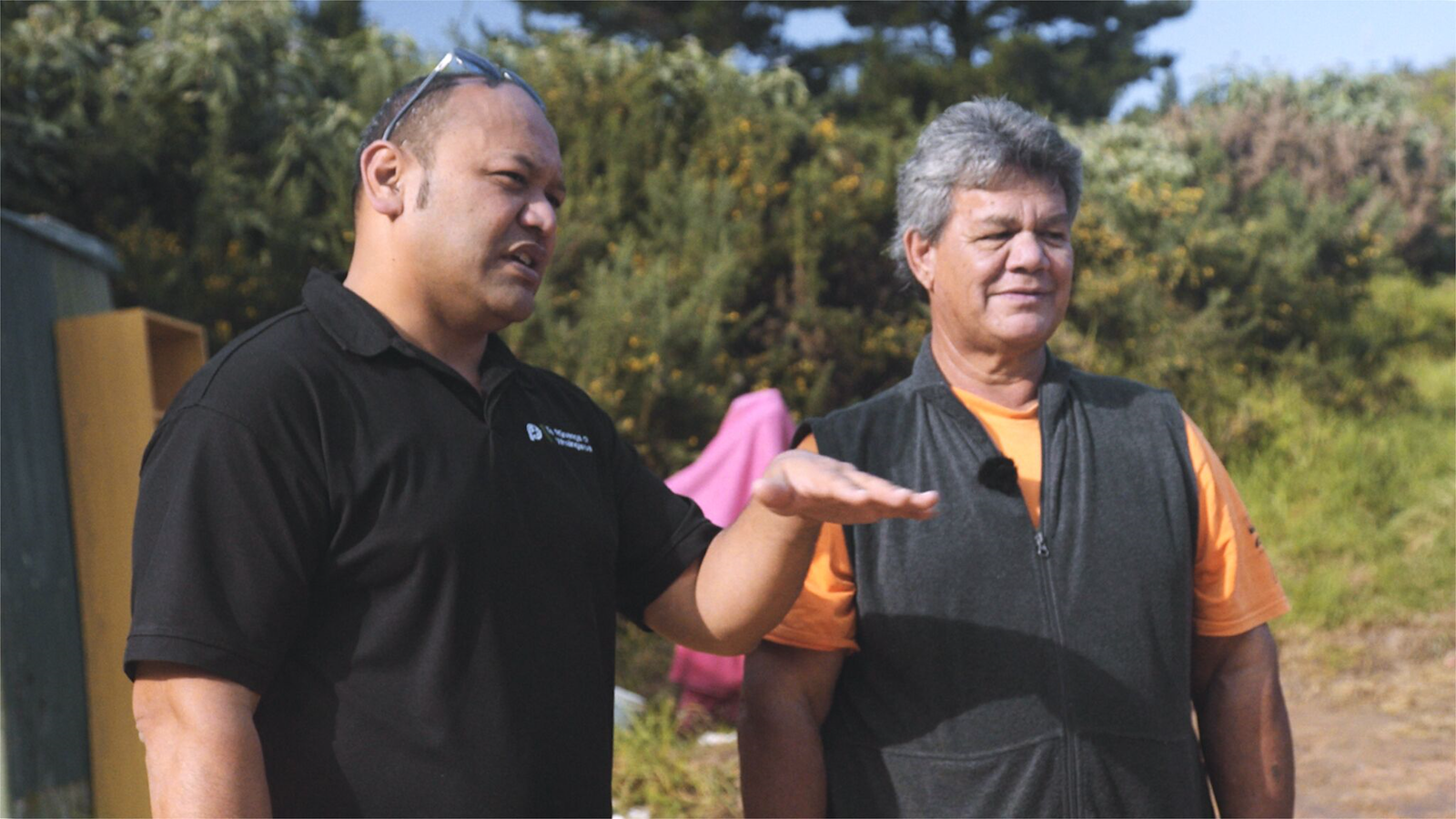 Toa (left) and Alex talk about the ‘next steps’ for the driveway and other overdue repairs.

Te Rūnanga o Whaingaroa CEO, Toa Faneva (Ngāti Kahu ki Whaingaroa, Te Māhurehure), is also amazed at the early impact of this change for the Sanderson whānau. They provide a range of social services to the community, and at the coalface he sees a lot of whānau struggling.

“Auckland is becoming unaffordable. There are a lot of families moving up here and putting strain on existing infrastructure and resources for families. So we alleviate some of that pressure by providing emergency housing.”

Currently transitional housing is provided by the rūnanga for whānau seeking accommodation. Often this is provided free of cost initially due to the unplanned way whānau have exited their previous accommodation arrangements, and their existing financial commitments to landlords and/or mortgage providers.

The rūnanga’s current emergency/transitional housing policy provides short-term (approximately twelve weeks’) housing for up to six whānau at any one time, in three detached self-contained units located at He Whare Āwhina rūnanga housing complex. These whānau will then be supported by the rūnanga to move into long-term housing in private rental or Housing New Zealand properties or to other options provided by wider whānau.

“In the 80s and 90s a number of families here became part of a home-buying programme which enabled them to purchase homes that were only 80 to 90 per cent finished. They were to complete those parts of the home that were outstanding like polyurethaning the floors. This was the case for the Sanderson whānau. But, like many others, they were unable to do this work. Over time the floor has turned to cardboard and the wet areas have fallen through with big holes in the bathrooms, toilets and kitchens,” says Toa.

Poor construction materials used at the time have also compounded problems, especially in the Sanderson home.

“There’s a lot of dampness across the house. The ceiling has waterproofing issues dating back to when the roof was constructed. There’s no bracing on the floor. All this has contributed to the house being in the state that it’s in now.”

The impacts of poor housing conditions are numerous.

“For a lot of our young tamariki, not having warm, safe, dry homes contributes significantly to poor health outcomes. They’re more susceptible to infectious and respiratory diseases. This means they’re either kept at home or hospitalised so they can also miss a lot of school. These issues can create tensions and pressures in the home which can lead to family violence situations also.”

For the Sanderson whānau, their new driveway leads the way to a new and better life.

“They are really thinking twice about what they can do now to move forward from this. They see this as a really critical point of time in their lives in terms of being able to move forward that much more.

“We think that through this one housing project, a range of rural pressures are more directly lessened than through any one health or education programme alone.”

Thirteen proposals covering a wide spectrum of housing needs will receive funding totalling $9.6 million for projects that focus on home improvements in communities with high levels of housing disrepair, projects that will help Māori organisations to provide housing for whānau, and projects that will increase the number of affordable rental homes for Māori.

“In one year alone, this is a greater level of direct Government housing investment in the region than the last five years combined, and reflects the determined focus of the Māori Housing Network to assist whānau in greatest need.”

Mr Flavell praised Te Tai Tokerau projects describing them as a credit to the communities they would serve, and saying that they were “exemplifying the commitment and dedication of local people to get more whānau into safe, healthy and secure housing”.

Mr Flavell said there were an estimated 12,000 Māori whānau living in severe housing deprivation with many of those located in Northland communities.

“It is therefore very pleasing to see that the Māori Housing Network investment in Te Tai Tokerau spans all three of the focus areas and is spread across all communities in the region.”
Since being launched in October 2015, the Māori Housing Network, which is part of Te Puni Kōkiri, has received hundreds of enquiries for its support and assistance which Mr Flavell says reflects the enormity of the need in Māori communities.

The Māori Housing Network, led by Te Puni Kōkiri, has a total of $17.6 million a year for Māori housing projects.

The Māori Housing Network has been set up to complement the energy, enthusiasm and entrepreneurship in the Māori housing sector, and to provide people with information, advice and practical support to build capability. The network also manages funds to support projects to improve housing outcomes for
whānau Māori.

The Māori Housing Network is about ensuring whānau have access to safe, secure and healthy homes which in turn improve health and wellbeing.

Since last October to 31 May 2016, the Network has been helping to build 42 affordable rental homes, and is supporting housing repairs for around 165 whānau. It has also been funding infrastructure (power, water, sewerage system, roading, gas and telecoms) for social and affordable housing and papakāinga on Māori land for 113 whānau.

For more information about the Māori Housing Network visit the Te Puni Kōkiri website at www.tpk.govt.nz.