The pull of home accelerates papakāinga construction in Waiōhiki

The construction of papakāinga housing in Waiōhiki, Hawke’s Bay, is drawing whānau home to live on their ancestral land. A new generation is bringing skills back to the rural community and becoming kaitiaki of their whenua.

The sound of hammers and saws, the sight of high-vis gear and builders crouched working on rooftops pervade the small rural community of Waiōhiki in Hawkes Bay.

“Our tīpuna used to live here and we’re all coming back now. There’s a shift and it’s a beautiful thing to see,” Horiana Hawaikirangi says as she walks through her half-built whare.

Horiana and younger sister Te Pō are in their twenties and building their first homes on the whenua where their koro grew up.

“We're able to dwell where our marae sits, where our awa (Tūtaekuri) runs, where our maunga Otātāra and Hikurangi sit. We can live here like our tīpuna used to and we can be kaitiaki and guardians,” Horiana says.

The sisters’ houses are the final additions to Te Piringa, the Hawaikirangi whānau papakāinga.

In December 2018 older brother Rapihana Te Kaha and his whānau and older sister Hinewai and her whānau moved into their own homes on the site south of Napier. Their mother Karen lives between them in her own smaller house.

Te Puni Kōkiri has contributed to the cost of construction and infrastructure for all five whare.

Once the new houses are finished the three generations will be living together on ancestral land, supporting and being supported by each other.

“Someone's always here for you. Our mother’s mokopuna get to share their time together and I get to be an aunty and caregiver for them. Our kids need to be raised by whānau, by a whole tribe,” Horiana says.

As rangatahi, Horiana and Te Pō are in the uncommon position of overseeing the construction of their own three-bedroom whare. The framing is up and they have acquired the skills to run a critical eye over progress. 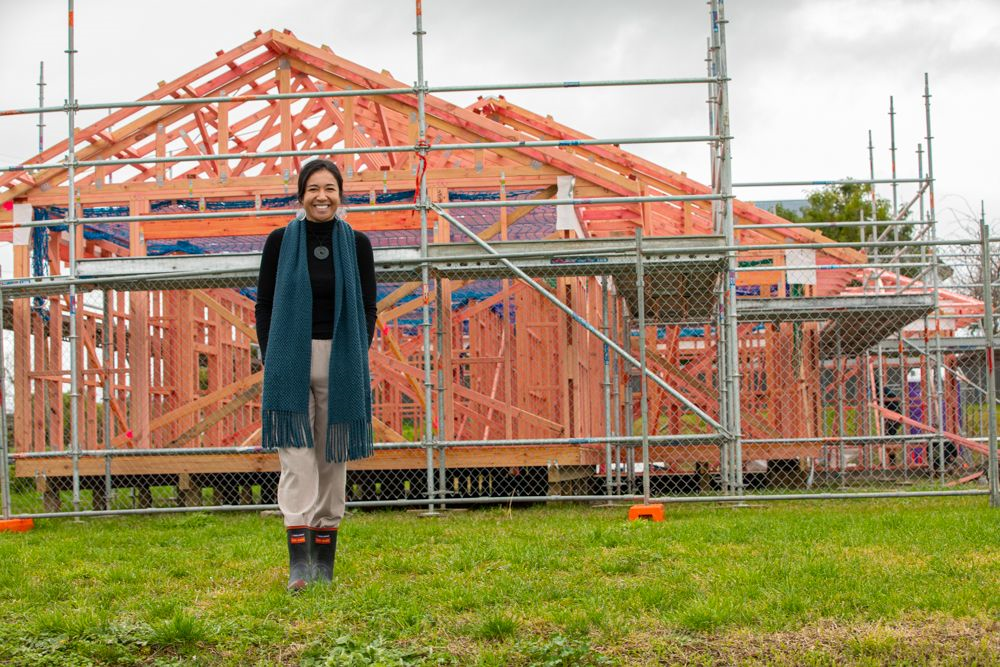 “It was overwhelming”, says Te Pō who is just 25. “But I've learned so many things through this process. I didn’t have a clue about project management to begin with. It’s scary but so life rewarding.”

Te Pō teaches te reo Māori at nearby Tamatea High School. Being on site has given her everyday responsibility for the project while Horiana is in Auckland studying midwifery.

Neither sister feels she is missing out on opportunities others their age are pursuing away from home. Both have spent years studying in other places. Now the pull of whānau and whenua is compelling, accentuated by a desire to give back to their communities.

Horiana has a couple more years of her midwifery degree to complete in Auckland before offering her services back home.

“I'd always known that I wanted to help whānau, but I've never known or couldn't see, where that would fit in with me until I found midwifery. Knowing that there's such a shortage of Māori midwives I think it's a perfect fit.

“Once I've collected my tohu and once I can honestly say that I'm a proficient midwife, this is tūrangawaewae for me. I am able to come home and help all of our whānau.”

The two new homes are to be affordable rental properties, shared with whanaunga or close whānau friends of similar ages. Like the three other homes, they are an integral part of the Hawaikirangi vision to provide a stable base in which whānau can prosper in “mainstream New Zealand” and te ao Māori, now and in the future. 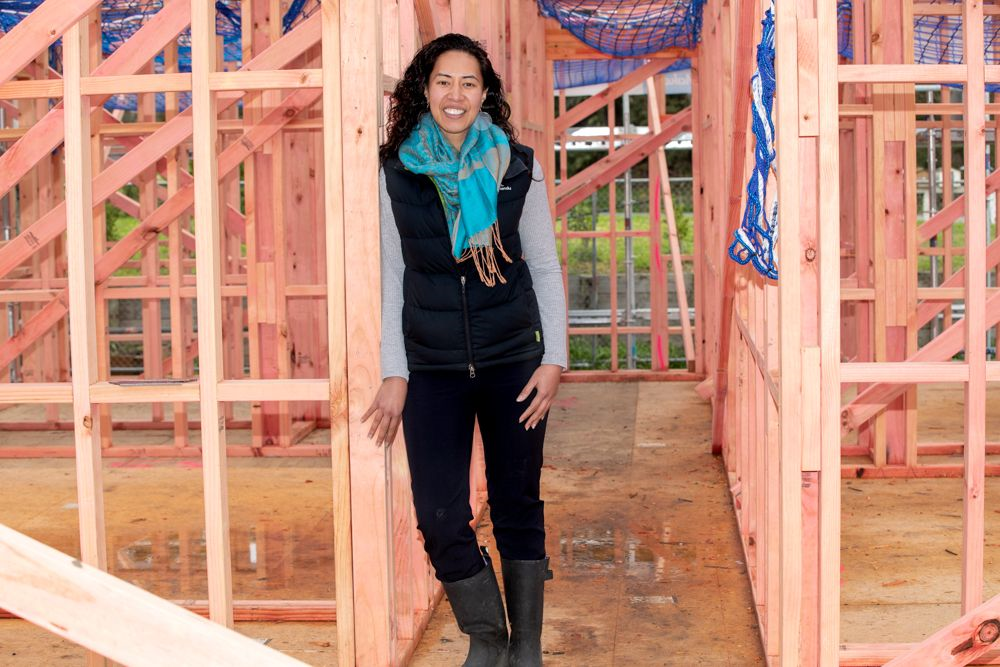 The start of the journey to kaitiakitanga

Across the fence, Te Hiiri Whānau Trust is building four rental homes on ancestral land. Trustee Laurie O’Reilly, who is overseeing the project, says it is just the start of a journey that will lead to true kaitiakitanga.

“As tangata whenua, as mana whenua, we have a responsibility to future generations. That means ensuring the environment is maintained or enhanced. So we've got a duty to look after our taonga – our awa, our maunga and obviously the people.”

Inspiration for this papakāinga came from Laurie’s uncle, Tamati Cairns, who wanted to move back home from Wainuiomata. His vision was to have the land converted for whānau with housing needs and for his Tūhoe whanaunga who want to work or study in Hawkes Bay.

The papakāinga is part of the Hastings Place Based initiative led by the Ministry of Urban Development and is in collaboration with the Hastings District Council. The place-based approach is to ensure housing issues in 'hotspot regions' are addressed more effectively.

Te Puni Kōkiri contributed $1,680,090 to the project from its allocation from the initiative with Te Hiiri Whānau Trust providing around $700,000 as borrowing. 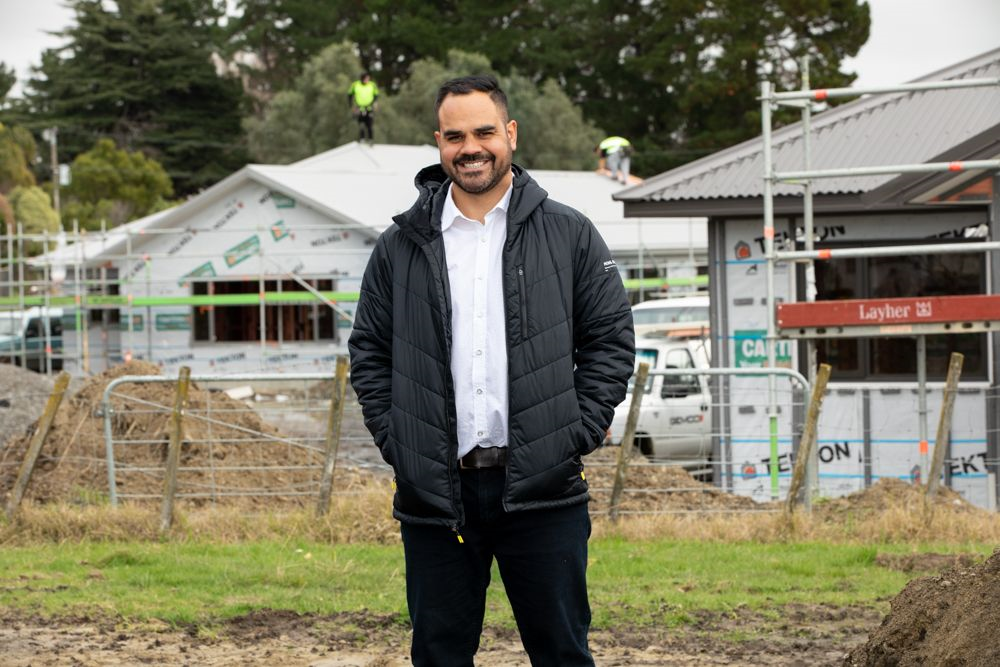 “These are beautiful, insulated modern homes. Straight away that will improve the health and wellbeing of our whānau. The enhancement of people's wairua, tinana, their mauri, is the next stage. It’s the aspirational, ambitious stuff.

“Good housing should be a right. But with any right comes responsibilities for those homes and the environment,” Laurie says, anticipating that whānau and future generations who live in the papakāinga will practise manaakitanga and kaitiakitanga.

New beginnings for whānau moving into the Te Hiiri and Hawaikirangi papakāinga bring a new generation of kaitiaki to Waiohiki.