When Taika Waititi took home an Oscar at this year's Academy Awards, indigenous storytellers came under the global spotlight. The owner of a Māori creative agency wants to sustain that focus, by supporting other 'creative natives' to tell their stories to the world. He has found a way to do that through the Te Puni Kōkiri Cadetships programme.

James Rua (Ngāti Whātua/Ngāi Tahu) is co-founder and company director of The Hood & Co, a visual content and digital marketing company. The Auckland-based agency counts Air NZ, ASB Bank and Spark among its corporate clients. Recently it has broadened its client base to include more Māori and Paciﬁc businesses.

"More of our jobs are telling indigenous stories through video and photography. So, we're now on the lookout for more Māori directors, editors and script writers to be part of our team."

James turned to Te Puni Kōkiri for help. Working closely with Te Puni Kōkiri advisors he submitted an application for the Cadetships programme and was successful. Cadetships support employers in a wide range of industries to mentor, develop and train Māori staﬀ of all ages so they can take on more senior roles, extend their career paths and boost workforce development. 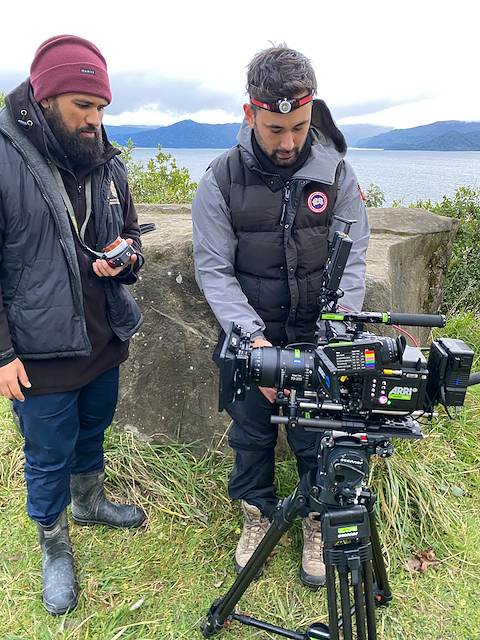 The Cadetships programme was perfect timing for Te Haunui Tuna (Ngāi Tūhoe) who started with The Hood & Co in July 2020, by working on a video campaign for a government department and Ngāi Tūhoe.

A requirement of the contract was that the company take on an aspiring Māori creative from Te Urewera and Tūhoe region, to gain work experience in the field of video production.

Te Haunui, a tā moko and visual artist in Whakatāne, came on board to pursue his dream of becoming a ﬁlmmaker - an arrangement that led on to his cadetship ﬁve weeks later.

James and the crew were impressed with his work ethic and ability to quickly learn new skills.

"From start to ﬁnish Te Haunui was learning ﬁrst-hand. He would think one step ahead and be there when needed to help out other team members. His local knowledge of the area was also very useful, helping us to bridge relationships with the iwi and source talent," says James.

Midway through the shoot James started to think about how they could help Te Haunui continue his development, once the project was ﬁnished. That is when he looked into Te Puni Kōkiri Cadetships.

Te Haunui, too, was ready for the next step. Over the last three years he had been exploring diﬀerent forms of digital story-telling, including animations, podcasts and vlogging. The experience on the project cemented his ambition.

Now that his cadetship is underway he has already got stuck in under James' guidance with creating new digital content, developing scripts, interviewing, post-production and learning how to take on customer feedback. 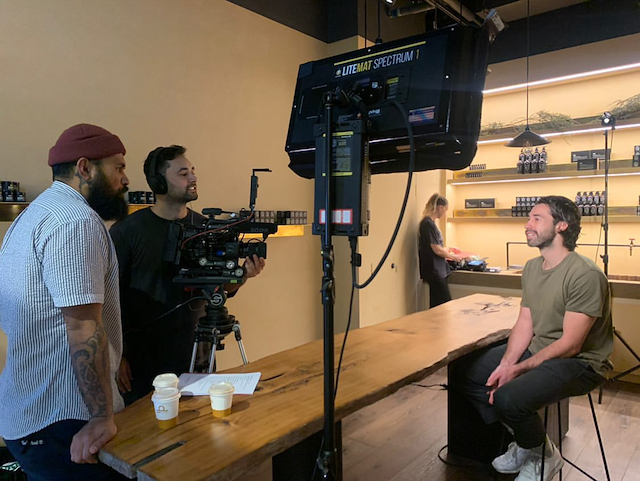 For the first mahi of his cadetship, Te Haunui created new digital content for the Auckland Māori business network, Whāriki. Photo courtesy of The Hood & Co.

Although the six-month cadetship programme is in its early days, both The Hood & Co and Te Haunui are already beneﬁting.

"We're pretty blown away by how much he has learnt and contributed to our company in such a short amount of time. Taking on board a new employee straight after lockdown required us to take a leap of faith to continue growth in our company."

"It was a risk that's already paying oﬀ. I think we've found a bit of a gem in Te Haunui."

Te Haunui says he is grateful for the opportunity.

"The whole experience so far has been amazing! I'm learning heaps and James and the crew are really open and receptive to questions I have about the ﬁlm making process. I learn best when being around experienced people and James is exactly that. He's done it all."

The company wants to keep fostering new Māori talent into the ﬁlm industry. James says The Hood & Co could provide a platform for creative individuals like Te Haunui to develop their skills, as well as a  gateway for new connections and opportunities. Already Te Haunui has been oﬀered work on a feature ﬁlm this summer, as a result of the professional contacts he made on the Te Urewera shoot.

"There deﬁnitely needs to be more Māori creatives in the industry, but it's hard to get your foot in the door, especially if you're up and coming," says James.

Cadetships can open that door.

Their ﬁrst experience with the Te Puni Kōkiri Cadetships programme has inspired the company to reach even further. James would like to facilitate a network for Māori creatives to get their projects oﬀ the ground and expand the team with remote satellite oﬃces.

Driven to learn and deliver

The next phase of the cadetship journey for Te Haunui will see him working with James on a documentary. The ﬁlm forms part of an interactive exhibition led by designer Kiri Nathan.

James has no doubt Te Haunui will one day achieve his long-term goal of writing and directing his own ﬁlm.

"Te Haunui is driven to learn and is really curious. He watches and observes what's going on, and then he delivers."

In the meantime, Te Haunui is happy to be on his way.

"Cinema is a realm where I can be forever learning, and forever be a student. Being able to tell stories that mean something to me, to our country and to our Māori people, that really excites me."

Te Puni Kōkiri has delivered the Cadetship programme since 2010. In the Wellbeing Budget 2020 Cadetships received $22.7 million to expand from 500 to 1200 placements, including re-training those

from industries adversely aﬀected by COVID-19. Te Puni Kōkiri Cadetships support employers to develop, mentor and train new or existing Māori staﬀ so they can take on more senior roles and grow as leaders, while strengthening the business and industry they work in.

Top image: Te Haunui Tuna (left), in the editing suite with James Rua (in foreground), co-founder and company director of The Hood & Co.  The cadetship opportunity has enabled Te Haunui to further develop his editing and post-production skills. Photo courtesy of The Hood & Co.