Being whānau in a changing world

When the Turner whānau (Waikato, Ngāti Aamaru) moved into their papakāinga in 2017 they didn’t imagine it would become their sanctuary and lifeline during a pandemic.

“If we didn’t have a papakāinga me and Hone would be freaking about our kids and mokopuna. This way you have mokopuna around – not all of them but enough to reassure you that things are fine,” says (Miriama) Tilly Turner.

Tilly and her husband Hone (Barm) are the oldest generation in the nine-bedroom Ngāruawāhia papakāinga that they share with some of their eight children and spouses, tamariki and mokopuna. That’s 11 whānau members from four generations in one large house.

By the time COVID-19 restrictions were imposed in March they were well practised in collective decision-making. Developing and building the papakāinga was a complex process. Then the whānau established a food truck business offering mussel fritters.

“Planning is something we do quite well,” says one of the siblings, Rangitā Wilson. “So we utilised those strengths again to plan and prepare for what we needed to do for our bubble that includes kaumātua, rangatahi and a two-year-old.”

What they didn’t anticipate were the unexpected gifts of being housebound. First, Tilly and Hone Turner discovered the joys of virtual connection.

“Our mokopuna know how to use technology so every time they’re talking to somebody, I pop into the conversation and it’s another moko. It’s kept us really connected. I love being in this papakāinga space!” she says.

Hone Turner, an orator described by Rangitā as very social and ‘old school, if I don’t need it I don’t need it’, was introduced to Zoom through a tangihanga.

“It dawned on me that these different channels – I’ll say it like this – they’ll let us do what we need to do since we’re not allowed to attend tangihanga during the Covid-19 pandemic.”

He and Tilly are now doing an online course because, says Rangitā, they’ve decided for themselves it’s the new way they’re going to have to live for a while.

“In this little space of time they’ve learned so much about technology. Without hesitation or resistance Dad’s said yep, ok, let’s do it. There’s a need for it, before there wasn’t.”

Thanks to early investment in ultrafast fibre, working from home as well as popping in and out of each others’ Zoom calls aren’t a problem. 15-year-old Ryland Tomoana says without technology ‘we’d go insane not seeing (friends) properly, not even hearing their voices’. It’s helping her cope.

So is having her whānau around – something they now value more than ever.

“You’re closer with your family. We support each other, we love each other, we’re here for each other,” Ryland says. Her advice for others is to stay strong because even through the hardship ‘we got this’.

Ryland’s mother, Te Rewa Tomoana, lives with epilepsy and had just come out of hospital when Level 4 lockdown began. She too is relieved the whānau live communally.

“You’re having enough to worry about. Then you’ve got to still come home, be mum, be nan. But I know my children are kei te pai because of our current living situation.”

While their parents have resolved not to leave the house until Level 1 is announced, the sisters, Rangitā and Te Rewa, will decide together about sending their tamariki back to school.

“We’ve been really careful about how we break the bubble in terms of work and school because our parents are paramount. It’s been really good to bounce ideas off each other, to figure something out just by chatting to whoever’s in the room,” says Rangitā, adding that others in isolation might not have that connection. 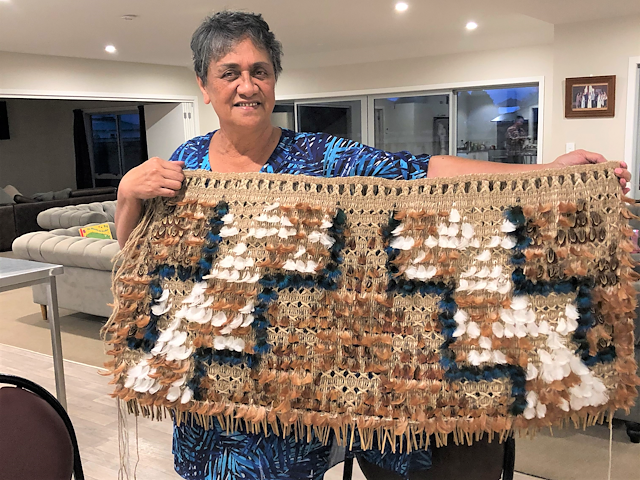 New ways of being whānau

What else has the whānau discovered? Rangitā echoes the Prime Minister when she reflects they’ve had to find new ways of being kind to each other.

“Sometimes whānau dynamics in a papakāinga aren’t as straightforward as they seem. We’ve had to work on what it means to be kind. We’ve had to learn how to be whānau in a different way.

“When you’re in isolation you don’t get the option to walk away. You’re stuck together. Coming out of this we have a whole lot more tools and resources for how to be kind to each other.”

Meanwhile, Tilly is weaving the memory of this period into a korowai, a tribute to her late mother Iti Rangihinemutu Rawiri who taught the art of korowai.

“She’s been gone ten years. The pattern talks about how she passed on knowledge. I’m hopeful that everybody will remember it was completed at this time, this pandemic. It has another side of the story to tell.”

This whānau has generously shared its experiences in a series of short interviews on iwi radio.

Photo 2: Miriama Tilly Turner with the korowai she is making as a tribute to her mother.