This report has been prepared to improve the evidence base for considering reforms to the regulatory framework, by considering:

It arises from the work associated with the Māori Land Tenure Review undertaken by Hui Taumata and draws on a number of case studies to provide rich descriptive data responding to these questions. It also identifies a number of issues that might usefully be considered in any review of the regulatory framework. In identifying these issues, it also draws on analysis of TTWMA and a number of earlier reviews.

There are around 1.4 million hectares (ha) of Māori freehold land 1 plus a very small area of Māori customary land2 . Over 2 million ownership interests exist in around 26,490 Māori freehold land titles. A relatively large number of owners own relatively small proportions of land with 61% of Māori land titles less than 5 ha. A relatively small number of management entities3 control significant amounts of land – 40 large incorporations account for around one-fifth of all Māori land by area, and 100 large ahu whenua4 trusts account for about 30% of all Māori land between them.

The passing of TTWMA in 1993 represented a major milestone in relation to Māori land tenure and a dramatic policy change. The declaration of Māori land as a tāonga tuku iho provided the driving force behind TTWMA’s two primary principles of land retention and land utilisation. Whilst the provisions of TTWMA clearly set out a range of structures and processes that ensure, for all intents and purposes, the retention of Māori land, commentators have raised questions about the way that regulation and practice under the legislation has facilitated, contributed to or hindered utilisation. The recent recommendations of the Hui Taumata Māori Land Tenure Review Group5 identified a number of areas for the amendment of legislation and change of practice under TTWMA to improve opportunities for Māori land utilisation. The

Group identified information shortcomings in relation to Māori land utilisation and the practice of the regulatory environment.

In response to these issues, case study research was designed to improve Te Puni Kōkiri’s knowledge base about land utilisation and identify areas of improvement in current regulatory regimes so as to promote Māori land utilisation.

Te Puni Kōkiri directed that the research be conducted initially as a series of case studies. The aim was to gather data from multiple perspectives to provide descriptive data about:

In the literature,6 a case study is defined as a method for learning about a particular instance

(i.e. the ‘case’) based on an in-depth understanding of that instance, gathered by extensive exploration and analysis of that instance holistically and within its context.

In the context of this research the instance or the ‘case’ of interest is Māori aspirations for their land and the enablers and barriers that impact on realisation of these aspirations. In selecting the ‘case’ a number of factors were taken into account including management structures; land block size; type of land (coastal, rural, urban) and geographic location. Four groups were identified in consultation with Te Puni Kōkiri and as identified in the terms of reference document by Te Puni Kōkiri. These were:

The following diagram illustrates our view of the linkages across the different groups and how the analysis will be integrated to provide the insights needed about Māori aspirations for their land. 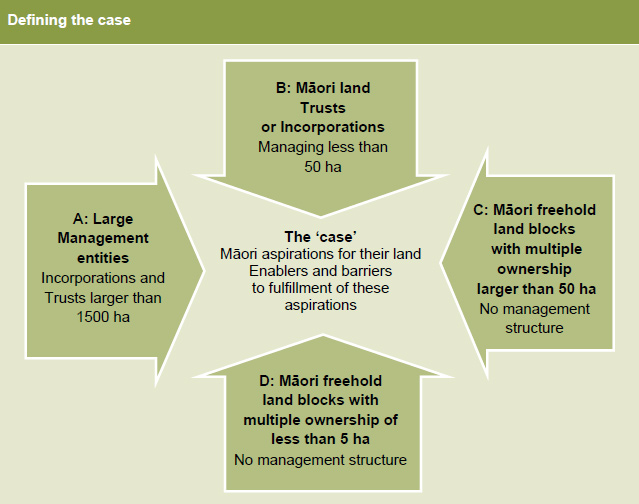 Land Grouping A: Large Management Entities (Incorporations and Trusts larger than 1500 ha): Within this land grouping scenario nationally there are 50 incorporations and 92 trusts in total. These incorporations and trusts, whilst represented to some degree across the country, are particularly concentrated in a small number of Māori Land Court districts. These entities manage a significant amount of Māori land – almost 60% of the total.

Land Grouping B: Māori land Trusts or Incorporations that are managing less than 50 ha with an emphasis on those managing less than 5 ha: There are only 12 Incorporations in this category for the whole country. The trusts in this category manage less than 7% of all lands under ahu whenua trusts. However, the 1,989 trusts managing properties of under 5 ha represent 35% of all trusts and the 2,350 trusts that manage land between 5 and 50 ha in size represent a further 41% of all trusts. Therefore, 76% of all ahu whenua trusts manage lands under 50 ha.

Land Grouping C: Māori freehold land blocks larger than 50 ha that have high multiple ownership but are not under a management structure: There are a limited number of properties in this category – less than 1,000. Although the properties in this category represent only 5.9% of all properties not under a management structure, they account for just under half of the area categorised as non-managed lands (136,042 ha) and almost one tenth of all Māori land.

Land Grouping D: Māori freehold land blocks of less than 5 ha that have high multiple ownership but are not under a management structure. Smaller blocks without management structures (11,137 titles) account for almost 50% of all Māori land titles. These titles involve 11,313 ha of land. This Land Grouping also places emphasis on land blocks that are under multiple ownership. The research focused on the 26% of blocks with more than 20 owners.

Case study sites were determined by looking for Māori Land Court regions where the prevalence of the identified group was high and the land controlled by that group was large relative to total land controlled by that group nationally.This approach was appropriate as we were looking for issues and themes rather than generalisable findings. This work was designed to help focus the next stage of the work. The second phase did not take place.

Land Grouping A: Two districts were selected for this category:

A. These manage approximately 298,000 ha of land. Aotea, therefore, is the district with the most land being managed by the larger trusts or incorporations.

Land Grouping B: Two districts were also selected for this category:

Land Grouping C: Aotea is the second highest district in terms of number of blocks over 50 ha that are not under a land management structure. Within the district there are 194 blocks in this category. These blocks total more than 11,000 hectares in size.

Land Grouping D: Tairāwhiti is the Māori Land Court district with the highest number of blocks of land under 5 hectares in size that are not under a land management structure. In this district there are 2,932 of these blocks. These represent 26.3% of all Māori blocks of this size.

Within each land grouping ‘case’ we identified sub-cases to produce manageable sample sizes to interview. Selection of sub-cases was based on the following:

The Māori Land Court staff used a range of sources including the District Trust Register, the Māori Land Information System (MLIS) 7 and the most recent trustee orders made by the court to identify accurate contact details for relevant trusts, incorporations and land block owners.

Given the large volume of owners for the blocks with no management structure group not all blocks were included in the sample. A random sampling approach was used. Contact details were requested for owners for the selected blocks from the MLIS, the District Register and any recent court orders. When no contact details were available for the selected block, it was replaced with a similar block (i.e. a block with the same name or one within the same local government district).

Once contact details were obtained, invitations were sent to the block owners to attend a hui held in the region. If more than one owner was listed, the invitation was sent to the first owner listed.

Four weeks notice was given to let people know about the impending hui and participants were provided with an outline of topics for the discussion. In addition, separate interviews were undertaken when particular individuals were identified at a hui as being relevant to the work.

While extensive effort was made to secure the contact details of a sample of land owners in the areas selected, this proved difficult, and a reduced number of case studies and key informant interviews were undertaken as a result. Six hui lasting 2-3 hours were conducted with a range of different types of land block owners as outlined below:

The information collected from these hui is presented below. To conveniently identify which Land Group from which area is being referred to, the following abbreviations have been used.

ME1500+ Land Grouping A: Large Management Entities (Incorporations and Trusts larger than 1500 ha).

NME<5 Land Grouping D: Māori freehold land blocks with high multiple ownership of less than 5 ha but not under a management structure.

7 The Māori Land Information System is a database established by the Māori Land Court which holds title and ownership information.↑

Structure of the Report

The remainder of the report is structured as follows: