Cutting our own track and walking it

The owners and trustees of Aorangi Māori Trust Board are amongst those leading the way in Hawkes Bay with an eight home papakāinga build at Waipatu.

The history of Waipatu papakāinga is tied to 7002 acres of land south of Waipukurau, heading towards Takapau.

History recounts that while the tūpuna of the hapū of Aorangi were away fishing for their families, their village was burned to the ground. When the tūpuna returned, they found themselves not only homeless but also landless.

In July 2017, a Memorandum of Understanding was signed between the Crown and Aorangi Māori Trust Board in Takapau. It included an official Crown apology for land grievances dating back to 1851 and brought one of the longest running Crown grievances to resolution.

The Memorandum, also included $3 million, first right of refusal for 10 properties in the Central Hawke’s Bay area, and co-management of Whatuma Lake.

The tūpuna of Aorangi hapū eventually relocated to Waipukurau and Heretaunga. Their descendants now live on different lands and Waipatu papakāinga is an important part of their legacy.

Steven Heperi, Chairman of the Aorangi Māori Trust Board. Photo by Josie McClutchie.

“Our whānau wanted to rebuild the community. Together with the Trust, we have worked to get to this point where we could build on the papakāinga,” says Steven Heperi (Ngāti Kahungunu), Chairman of the Aorangi Māori Trust.

“We honour the aspirations of our tūpuna and see this papakāinga as a continuation of a historical journey for our people”.

In addition, the decision to build on the Trust owned land came from a need for better land utilisation.

“A few years back, the Trust didn’t own many assets, only a few land blocks. One block was leased below market value. Another block didn’t have a lease so was non-revenue producing.

“One thing we knew for sure, we could do things better.”

The Trust wanted to ensure that Māori principles, such as whanaungatanga, manaakitanga and arohatanga, were strong ingredients in the papakāinga when it came time to look at design concepts.

“We wanted a communal area for whānau where they could interact with one another. We also wanted our tamariki and mokopuna to have a safe play area, so they didn’t have to play on the driveways or on the road”.

To fund the project, the Trust obtained one of the first ‘Pūtea Māori’ grants from the Social Housing Unit (which covers 75 per cent of building costs for the rental homes), and one of the first Kāinga Whenua Infrastructure Grants. Te Puni Kōkiri funded the feasibility study and provided support to prepare the proposal. The Pūtea Māori Fund has since been integrated into the Māori Housing Network which is led by Te Puni Kōkiri.

The papakāinga has drawn support from a range of Government agencies, local authorities and community organisations, including the Hawkes Bay Regional Council, A1 Homes, the Māori Land Court, Social Housing Unit (Ministry of Business, Innovation and Employment) and Te Puni Kōkiri.

Today, whānau have moved into all eight houses.

Their story provides valuable lessons for today’s whānau, hapū and iwi who aspire to establish papakāinga on their own whenua.

“At the start we found it quite difficult. There weren’t that many good models that we could learn from”, says Steven, “we were lucky that we had a positive Board”.

“Historically, Boards have been conservative and risk-averse when it comes to our whenua, so it was quite innovative for them to consider something different for our assets.

“Given our need for housing, and the historical journey of our people, the Board got their feet wet and engaged in the process. They had a lot of faith that we were speaking to the right people.

“All the way through the early stages we talked openly about an exit plan for the Board, a point where we knew it was time to back off and pull away from the project. That’s the type of progression that we had which was quite hesitant at times. So many efforts were made and many conversations were had to get us to this point.” 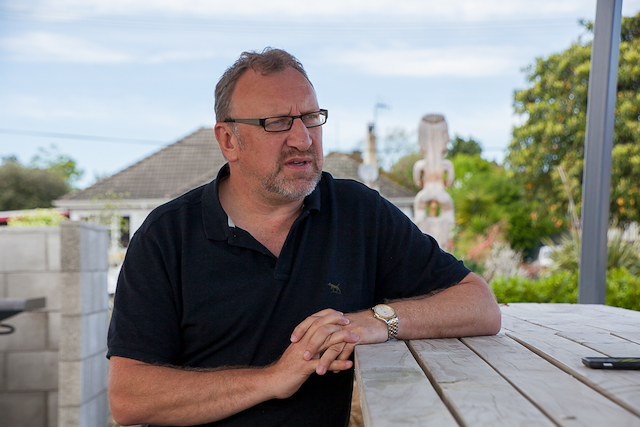 Paul Sheeran (Ngāti Kahungunu), Project Manager for the Waipatu papakāinga development, believes the project has had some good outcomes that go beyond providing homes for whānau, including improved capacity development of the Board, its members and its systems and processes.

“It was a struggle to get from aspiration to completion. We were cutting our own pathways and we were walking it. That’s when you fall over, you learn, you get back up, you fall over again. It’s all of those bumps and bruises, that as a Board, as a Project Manager, you get good outcomes outside of the whare themselves”.

Paul shares that one of the biggest triumphs was having the backing and commitment from the Board to fund the Project Manager position.

“You can’t build a papakāinga on two hours a week. Māori entities have been pursuing papakāinga for years and are still going,” says Paul, “We were quite new to papakāinga development but were able to progress quickly with the support from the Board.

“For example, someone needed to talk to the Council, liaise with the tradesman or relay to the Government about the project,” says Paul, “it’s been great to have that backing and now we can see the fruits of their decision”.

Paul shares that the papakāinga build has also provided skills and learning opportunities for whānau members.

“One awesome kaupapa that we set up with A1 Homes was to take on one of our beneficiaries. He’s about two years into his apprenticeship”.

With the completion of stage one the Trust is now looking across the road to another piece of land of about 2.5 hectare for stage two of the papakāinga development. 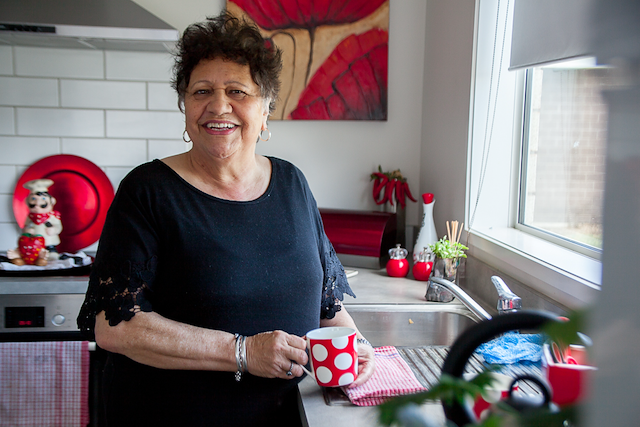 For Yvonne Sheeran (Ngāti Kahungunu), and her husband Alan, moving into their Waipatu papakāinga home in Hawkes Bay, seemed like a good fit.

The idea of not worrying about moving around all of the time was enough to convince the couple to live in one of the Waipatu papakāinga rental homes.

“At the time we were asked if we wanted to move into one of the homes. We were flatting in Havelock North but we didn’t know how much time we had in that rental. Now, being here at the papakāinga, we don’t have to worry about moving around all of the time.”

After living away from Hawkes Bay for almost 10 years, the couple decided to come home to live near their tamariki and mokopuna.

For Yvonne, she is delighted with her home and says “it’s good because we can go into the shared area and sit in the sun, walk around the grounds, and talk with the other whānau.”

“It’s lovely watching the children all play. I often stand at my kitchen window and watch them all. They all yell out ‘hello nanny! And some of them come over to check if we’re alright.”

Learning who we are

Mareina Apatu (Ngāti Kahungunu) is humbled to be living in one of the Waipatu papakāinga rental homes.

The idea of raising her tamariki near other whānau is what she describes as a ‘bonus’.

“I whakapapa to here through my dad and I am learning who we are. Coming back with my whānau has been perfect for us,” says Mareina.

Mareina, her husband Quinton Wilson (Rongomaiwahine) and their five tamariki were the last of the whānau to move into the papakāinga homes. 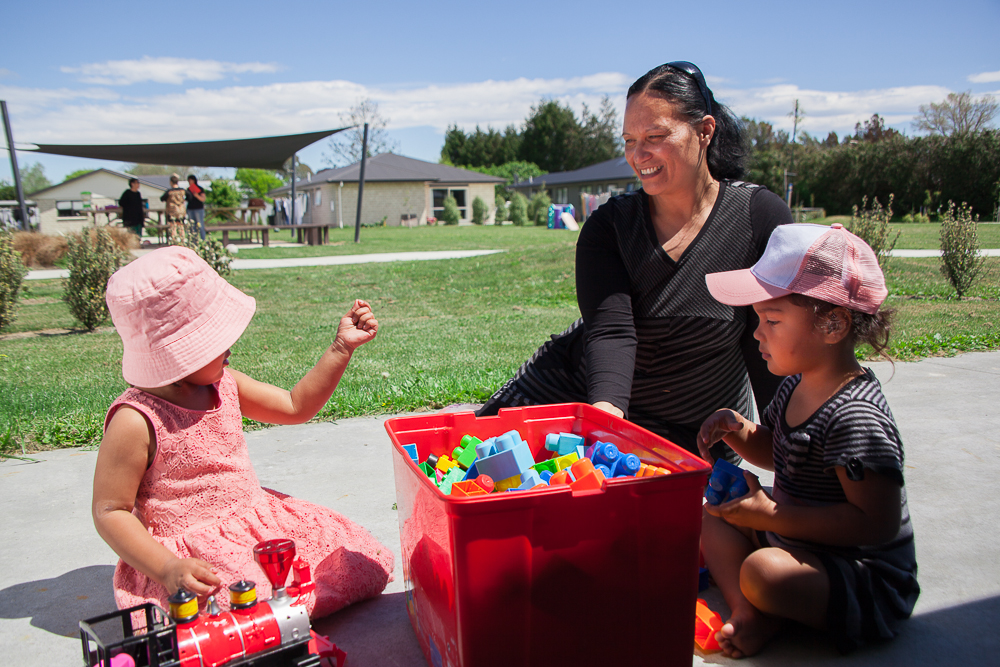 For her part, Mareina is delighted with her new home and does not mind sharing with others what it’s like living at the papakāinga.

“We often get people dropping in once a week wanting to know about the papakāinga. I love being able to provide positive feedback. I can’t see us moving from here at all.” 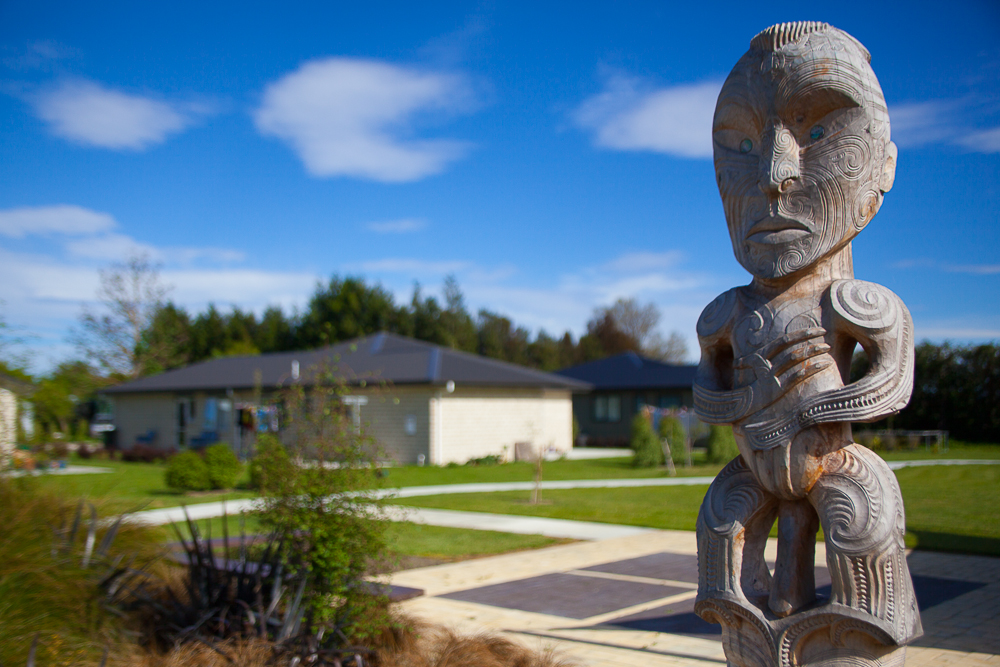 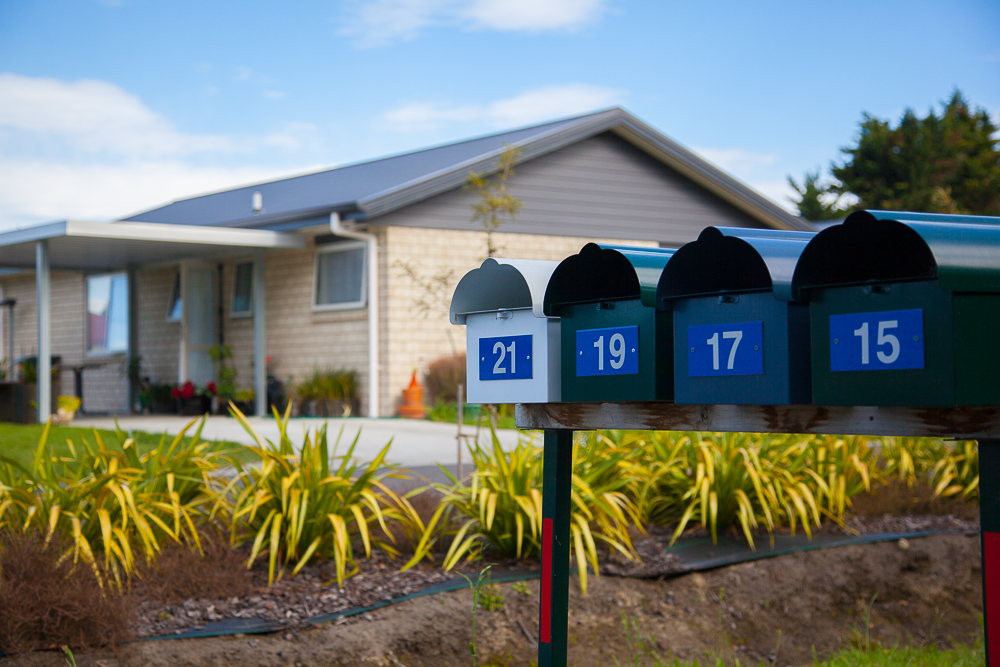 A place to call home for the owners and trustees of the Aorangi Māori Trust Board eight home papakāinga at Waipatu, 2017. Photo by Josie McClutchie. 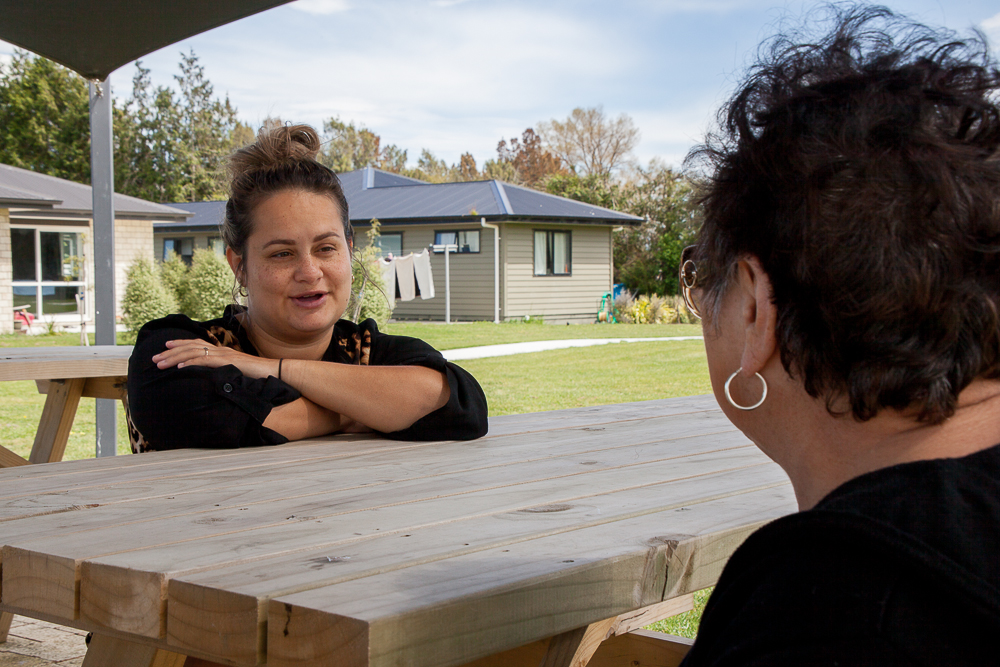 Māori principles such as whanaungatanga, manaakitanga, and arohatanga were central to the design of the papakāinga, 2017. Pictured, Waipatu papakāinga residents, Tarisse King and Yvonne Sheeran. Photo by Josie McClutchie. 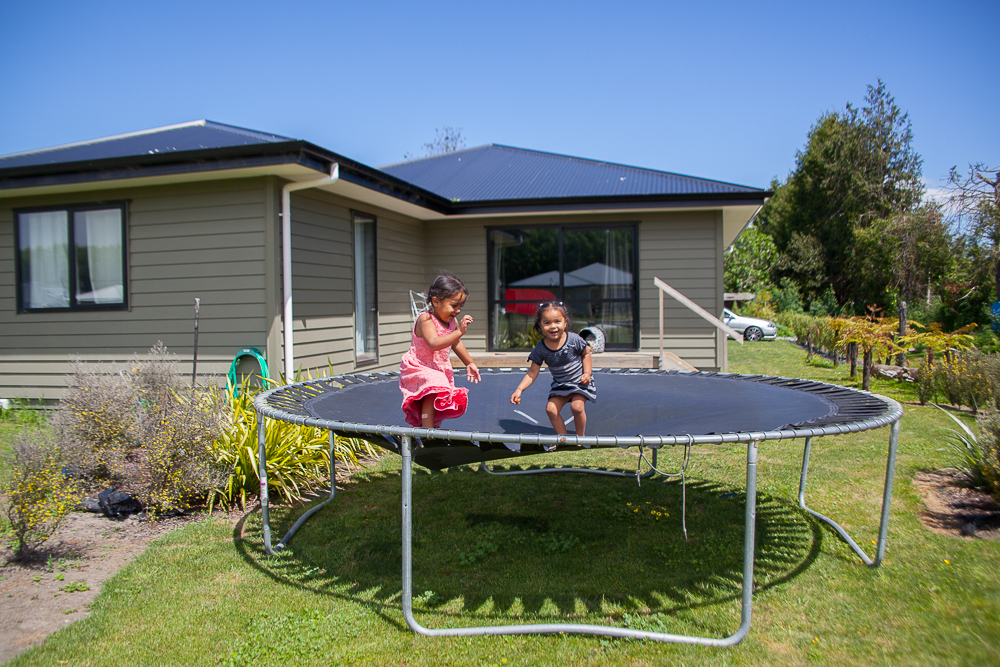 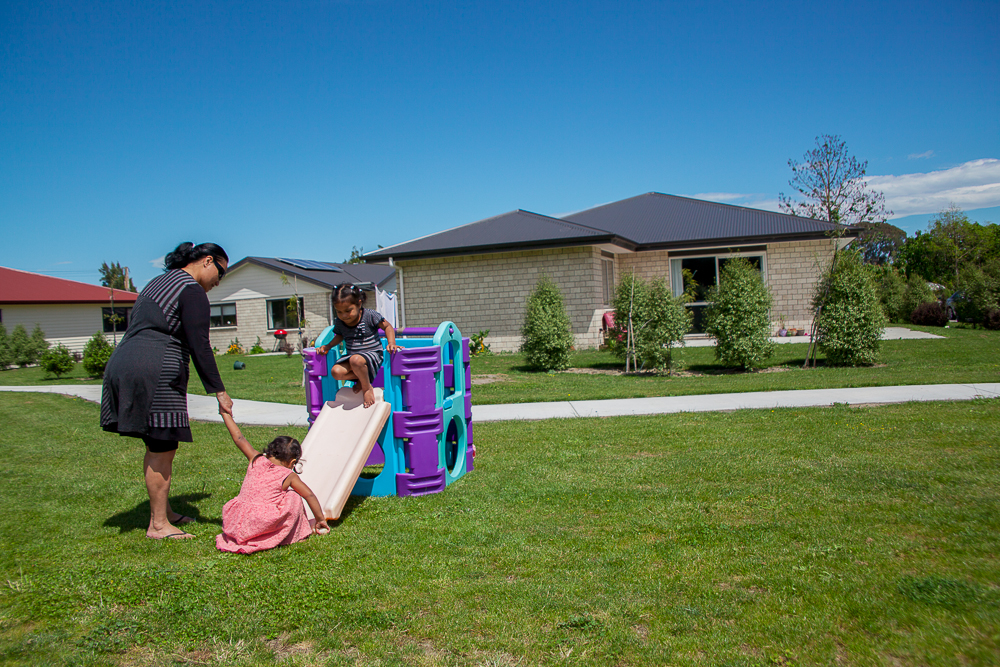