Over 400 Wātene Māori from around the motu gathered in Te Papaioea (Palmerston North) at the end of May for the 2021 National Māori Wardens Conference.

The event was hosted by the hau kainga from the Manawatu rohe and Māori Wardens from the newly established region, Te Piringa Manatōpū (Raukawa, Tākitimu and Te Whanganui-a-Tara). The two-day hui provided an opportunity for Wardens to catch up with each other since the last conference was held in July 2019 at Turangawaewae Marae in Ngāruawāhia. The main kaupapa of the hui was for the Te Puni Kōkiri Māori Wardens Project team to report back to delegates on the Māori Wardens Modernisation programme. At their last National Conference in 2019, Maori Wardens had voted unanimously for change towards greater autonomy and self management. Despite COVID-19, real progress had been made in supporting Māori Wardens to move towards a modernised role.

John and Judy Kamo, travelled from as far away as Wharekauri (the Chatham Islands) to learn about what progress had been made with the Modernisation programme. 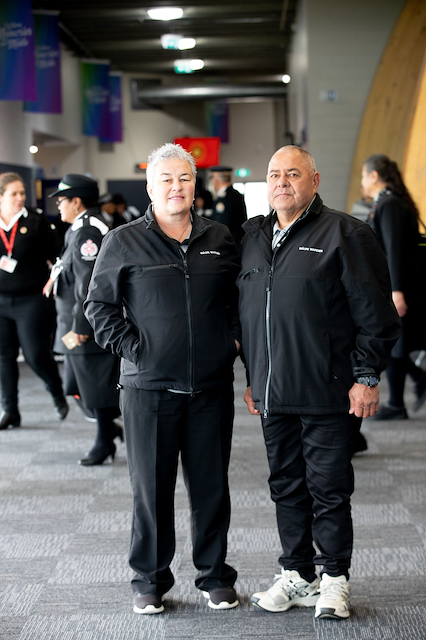 “We wanted to come to the hui to find out what that all means for us on Wharekauri,”  says Judy.

“Although there’s only 5 of us at the moment to awhi our community, our aim is to bring in rangatahi, so they take over.”

John says for him, the Conference would provide Māori Wardens with an understanding of where the movement is now headed, for the future benefit of its younger members.

Among the key workstreams reported back on included progress towards the establishment of a national Māori Wardens body. A Working Group (which included the NZ Maori Council) convened by the previous Minister for Māori Development, Hon. Nanaia Mahuta, agreed that the proposed national Māori Wardens entity would be based on a Confederation Model made up of six new regions, to enable kōtahitanga (as a collective) and rangatiratanga-ā-rohe (as distinct regions).

The six Regions are:

Among the audience listening to their kōrero, was Peter Walden, the longest serving President of the Māori Wardens Association. He said that he found it quite exciting what he was hearing.

“I think they are progressing well, and are on the right track. Each area is very different. They need to resolve to get these regions going quickly and properly.”

Brand/Identity was another key Modernisation workstream reported on at the National Conference. Delegates were given a sneak preview of the new Māori Wardens website to be launched later this year. The website will provide a platform for each Region to provide information to the public about what they do and forms part of a strategy to recruit and promote the movement to younger members.

The creation of digital resources also forms part of the recruitment strategy, and feeds into the mahi to capture the history of 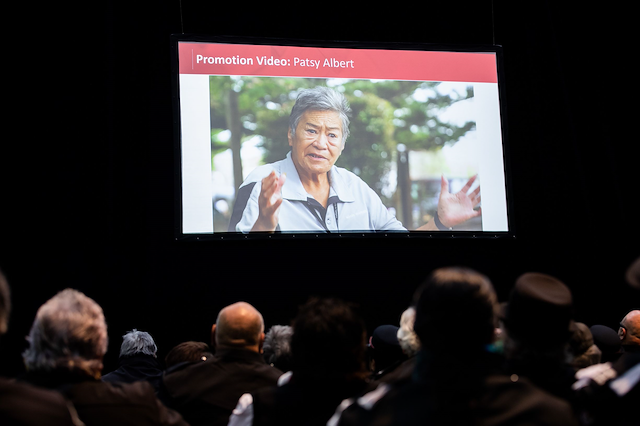 Māori Wardens. Delegates were shown some of the content produced in conjunction with Mahi Tahi Productions, a Māori video production company. One of the videos featured teenager, Te Amorangi Maehe, from Tāmaki ki te Tonga Māori Wardens, out working the beat in her community of South Auckland during the 2020 COVID-19 lockdown. Another video featured Patsy Albert, a long-standing Wātene Māori from Te Taitokerau Māori Wardens, talking about the values of Māori Wardens.

Dennis Hei, a 16 year-old Māori Warden trainee from Whangārei, grew up among these values. As the mokopuna of Taka Hei, a leader within the Taitokerau Māori Wardens, he says his nanny took him around with her to every Māori Warden hui. But this was the first time he had attended the National Conference as an official delegate.

I said “Kia ora” to the other rangatahi from other rohe here, although we didn’t have much time to have a good korero because of all the presentations that were going on.”

Mahi Tahi Productions were also present filming throughout this year’s conference, and among the delegates they interviewed was a rangatahi from the Tairāwhiti Māori Wardens, Paenoa Pahuru-Huriwai. For Paenoa, he believes recruiting more rangatahi would be a big step forwards for the Modernisation programme.

“The more rangatahi get involved with our Wātene, that’s modernisation in itself. Being able to recruit the younger ones, so as our older ones hang up the jacket you’ve got more to fill their place.” Among the many stand out moments during the two-day hui was a moving kōrero shared by the Deputy Police Commissioner, Wallace Haumaha. In his wide-ranging address he spoke about his personal experiences following the 2011 Christchurch earthquake and the 2019 mosque shootings in Christchurch. During his presentation, he emphasised how critical empathetic responses were, and acknowledged this as being a real strength of Māori Wardens throughout Aotearoa.

During the conference dinner, delegates were also entertained by the Howard Morrison Quartet- Take 2. The performance was a thank you to Ngā Wātene Māori for their community mahi, particularly during the COVID-19 lockdowns

Another memory delegates took away with them, represents the past, present and future of the Ngā Wātene Maori movement. To a funky music soundtrack including “Poi e”, Wardens from Te Piringa Manatōpū and Tairāwhiti, took to the catwalk in the ‘Inaugural Māori Wardens fashion parade’, modelling stylish options for modernising the Māori Wardens uniform.

Ngā Wātene Māori are renown for their signature, black and white  ‘number ones’, but the fashion show provided the new Regions with potential ideas for a range of uniforms that can be worn when out directing traffic, looking after mahuhiri at the marae, or patrolling the streets. Next year’s national conference in mid-2022, will mark the end of the three-year Modernisation programme which began in July 2019. Over the next 12 -18 months, the Te Puni Kōkiri Māori Wardens Project team will focus on transitioning the Project’s resources to the new Regions. In previous years, management of this resourcing had been administered by the Project team, however from 1 July 2021 this capability support resource will now be directly managed by the Wardens’ regional governance groups.

Te Rau Clarke, Project Manager, of the Māori Wardens Project team, says the last piece of the puzzle is to support the Wardens to get a national entity up and running.

“That’s the challenge for us in the next 12 months. We will be working with representatives from the six regions to set this up, and to make a range of decisions including signing off on the NZQA Māori Wardens qualifications to be introduced next year, and what management and reporting systems for the new entity need to be established.”

Visit the 2021 Maori Wardens National Conference page to watch interviews with some delegates at the Conference.

Watch highlights from the 2021 National Conference in the video below.