Whānau ora is a culturally grounded approach to improving the wellbeing of whānau as a group while addressing individual needs. 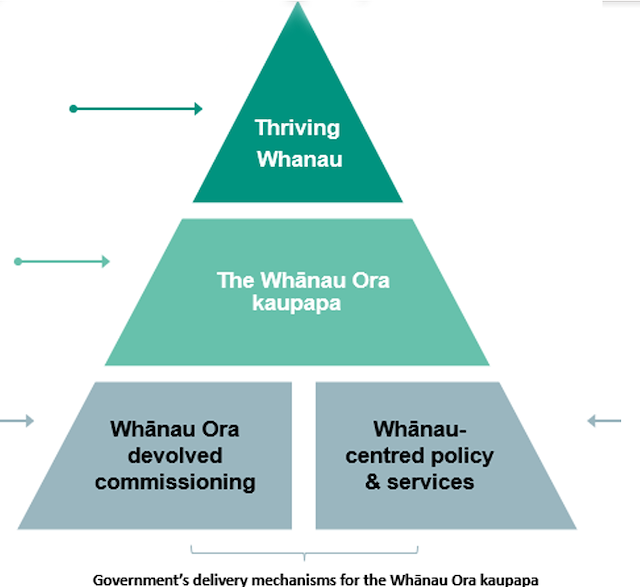 Whānau Ora improves the wellbeing of whānau as a group while addressing individual needs, using a culturally grounded and holistic approach.

It puts whānau at the centre of decision making about their wellbeing and supports them to identify and achieve their goals.

A whānau-centred focus leads to better outcomes for whānau, Māori and Aotearoa, culturally, socially and economically.

Dame Tariana Turia, who led its establishment, said Whānau Ora is about empowering whānau to take control of their future.

“What we want for our whānau is to be self-determining, to be living healthy lifestyles, to be participating fully in society and to be economically secure.”

She has said Whānau Ora is about self-determination: “to know ourselves, our strengths, our challenges and chart our own course.”

The Government is enabling Whānau Ora to become inherent in everything agencies do, especially their service delivery.

Because delivering whānau-centred services is best done by the community, government is enabling local solutions and local approaches, as part of being nimble and embedding the kaupapa.

Whānau-centred services focus on the whānau as a whole and build on whānau strengths to deliver brighter futures. These services:

Te Puni Kōkiri is leading the work of embedding whānau-centred approaches and building understanding and connectedness of Whānau Ora among government agencies and the wider public.

Whānau Ora complements rather than replaces the services for which Government agencies are responsible.

How does Whānau Ora link to whānau-centred approaches?

Whānau Ora is the kaupapa that improves the wellbeing of whānau, through whānau-centred approaches. These include initiatives such as Ngā Tini Whetu, Localised Commissioning, Whānau-Centred Facilitation initiatives and Paiheretia Te Muka Tangata.

Why are there these different approaches?

These initiatives involve working with agencies and providers to target specific needs such as whānau with tāne in prison, whānau affected by family violence and sexual violence and early support for vulnerable families, or they are tailored to meet the individual needs of their local communities.

How are whānau-centred approaches working across government?

This is being delivered in several ways. One is through agencies, focusing on providing whānau with access to equitable services and another is through the various initiatives and programmes such as Localised Commissioning and Paiheretia Te Muka Tangata.

Te Puni Kōkiri also has a leadership role to grow the influence of whānau-centred policy and the investment in Whānau Ora across government and into our communities. This sits alongside its monitoring role for how well public services perform for Māori as both citizens and whānau to deliver equitable services to achieve Whānau Ora.

What else is planned for Whānau Ora?

The next phase for Whānau Ora is now underway to deliver whānau-centred approaches across government.

Government agencies are implementing a range of work on Whānau Ora including further evolution of the commissioning models (both generalised and localised commissioning), expanding whānau-centred models across government and ensuring whānau voices shape the future of Whānau Ora.

Developing and sharing research and data on Whānau Ora and using whānau-centred approaches is integral to informing this work.

How has the Ministerial Review of Whānau Ora in 2018, Tipu Mātoro ki te Ao influenced the direction of Whānau Ora?

Tipu Mātoro ki te Ao endorsed the Government’s work on Whānau Ora and made several recommendations. Budget  funded initiatives to respond to the findings of the Review and support Whānau Ora to achieve its full potential, include: