Helping rangatahi get into the ‘digi’ creative space

Hori Mataki, creative lead for Ariki Creative and member of Te Ao Hangarau, is paving the way for rangatahi with an interest for digital technologies. In his words, Te Ao Hangarau is ‘setting up the change for rangatahi to build off our shoulders to get into the digi space’. Meaning ‘The Modern World’, Te Ao Hangarau formerly known as Digital Natives Aotearoa, is comprised of Ariki Creative, Māui Studios and Manu Media, and more recently the lease-holding tenants of 10 Show Place and contractors. Together these kaimahi aim to learn and grow together in their respective specialist areas, while also developing learning opportunities, educational pathways and interest for digital technologies in other young Māori. 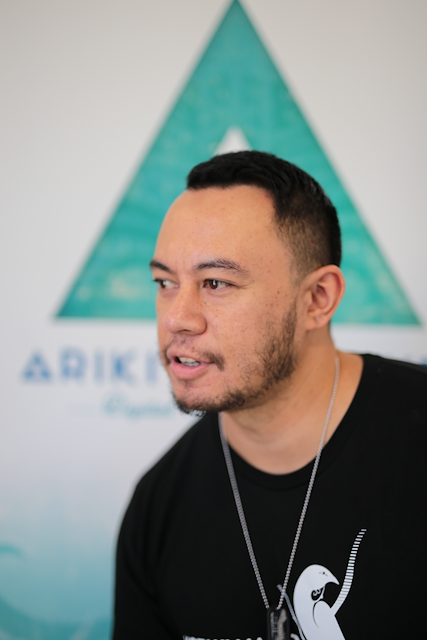 The core values of Te Ao Hangarau are immersed in the realm of kaupapa Māori.

“We believe in sharing our skills with the community, using digital technology to help whānau whānaui and rangatahi, as well as leaving a legacy for other aspiring Māori digital creatives to follow should they wish to pursue a career in the digital creative industry,” says Hori.

The overarching vision for Te Ao Hangarau is to host rangatahi at digi-wānanga, funnel those whose interest is ignited into tertiary education pathways, provide internship opportunities for them to grow experience and leverage existing relationships to assist these rangatahi into gainful employment in the digital creative industry.

It all started with Whānau Ora

“They wanted us to come up with some ideas on how we could help whānau interested in the digital technology space so a group of about eight of us pulled together,” says Hori.

Since its inception in 2015, the collective has grown organically receiving support through Whānau Ora, and more recently, through the Ka Hao Māori Digital Technology Development Fund securing funding support totalling $260,000.

The vision for Te Ao Hangarau to grow Māori literacy, education and employment in creative digital technologies and mixed media is now one-step closer to becoming a reality.

With support through the Ka Hao Fund, Te Ao Hangarau is taking on four tauira [interns], one of these interns being Tom Williams (Waikato/Tainui).

“I like to learn by doing so the internship is a perfect way to be able to do this and advance quickly. It is so much more enjoyable doing something you love every day,” he says.

“Today I am designing icons, maps and video for Ngāi Tahu, and yesterday, I was designing an animated video for Te Ara o Takitimu. The variety has been great and I’m picking up different skills each day.”

When asked what his next steps will be following the internship Tom is nothing but pragmatic about what lies ahead.

“At the moment I would like to use the next 2 years to build my skills in this area and perhaps in the future run my own business. Design is such a fast moving industry, so it will depend on what skills I gain during this internship with Te Ao Hangarau and what demand is out there for design.”

Luke brings a unique perspective to the team with his psychology/philosophy background and combines this with his passion for telling local stories about the positive impact of being a part of a Māori collective.

He has enjoyed working with the tauira [interns] to find the best ways for them to get the most out of Te Ao Hangarau. He has jumped at the chance to identify opportunities to collaborate with other initiatives and value wherever possible.

Next on the horizon for Te Ao Hangarau is developing potential partnerships and sponsors, integral to this current focus will be forming a strategy for their kaupapa, vision and initiatives.

Applications for the Ka Hao Fund are now open

Applications open on 9 February and close on 9 March 2018.

Find out more about the Ka Hao Fund and how to apply.