Whānau Ora - From First Year Reflections to the Future

The Pasifika Whānau Ora and Aniva Pacific Health Workforce National Conference in Wellington, on November 25 - 26 2015, provided opportunities for Pacific providers and partners of Whānau Ora to share ideas, knowledge and experience gained from the first year of Whānau Ora Commissioning. 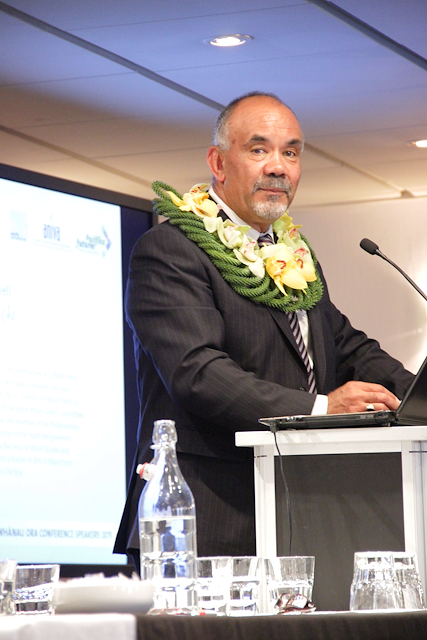 Mr Flavell explained the good relationship he has with the Pasifika Futures Board.

"I appreciate the good work Pasifika Futures does for leading Whānau Ora work and I am committed to make changes on how we do things moving into the future."

The Minister raised the issue of him as a Māori leading the Pacific Whānau Ora work.

"The Whānau Ora work for Pacific should be led by a Pacific person" and he pointed in the direction of Hon. Sam Lotu-Iiiga, Minister of Pacific Peoples.

"The issue of governance is important. Looking at the Treaty relationship, I feel that it should include our Pacific brothers and sisters and not just the iwi leaders. It’s something that must be addressed."

Mr Flavell gave his commitment at the conference to ensure Pacific families are being served to the standards set to meet growing needs, although adding that finding enough resources is always challenging.

"I see a lot of our people suffering. The amount of money going to Pasifika Futures doesn’t reflect the issues of deprivation across the country."

He believes the concept of Whānau Ora works.

"The government will take it up to another level and I’m prepared to bid for more funding. This is by increasing resources and securing more money towards Whānau Ora work."

"We need to share our stories, tell everyone about what we do. Share Whānau Ora stories with other people so they can sign up to be in the system."

"You (to the conference attendees) are all doing a great job. I absolutely believe in Whānau Ora. We deal with families and not individuals," Mr Flavell said.

"Whānau Ora is in a good space; we know our communities, we know the families, we feel their pain and we understand their issues."

Mr Flavell said addressing the needs of families at the centre of service delivery has had significant results, including those that were previously seen as "hard to reach".

Minister Te Ururoa Flavell: "When it comes to direct services to families, the Whānau Ora work provides a positive investment driven approach in dealing with vulnerable families across New Zealand."

However, Mr Flavell said while there is much to do in responding to whānau needs and aspirations, the Minister believes there is no guarantee of the future of Whānau Ora.

"We have to work on results, demonstrating whānau-centred approaches are a powerful catalyst for creating positive change."

"When it comes to direct services to families, the Whānau Ora work provides a positive investment driven approach in dealing with vulnerable families across New Zealand."

"The challenge is to get a lot more direct communication and connection with more families about their areas of concern. I believe the commissioning agencies have the ability to deliver resources directly to these families to enable more people to benefit from your trusted relationship, to help them to realise their potential."

In his speech, Mr English said the Government would come under huge political pressure to provide more assistance to vulnerable families and this relies heavily on the relationship of trust between the commissioning agencies and low income families.

"As households get a bit stretched in meeting the rising cost of housing, it inevitably creates pressure for government to look at programmes that work, like Whānau Ora, to combat these issues."

"People need to feel hope. But they can see the opportunities for jobs ahead of them. I see healthcare, economic development and dealing with habits of debt that burden families are areas of priorities for Pacific Whānau Ora work."

"There’s a healthy competition between the work of commissioning agencies and service delivery of general government departments, but I have to say none of them produce an annual report like Pasifika Whānau Ora."

He said that the government will continue to spend more money where they can see success.

"I see the Pasifika Whānau Ora annual report quoted nearly 3,000 families but there’s a lot more families to get to."

"The challenge is to work closely with your funders and providers and let them have a crack at your money to tailor it directly to vulnerable families across NZ."

Mr English said the Government would rather hear more success stories of Whānau Ora work, to be able to provide more assistance to families, and to identify where the gaps are.

"I am very impressed with the progress made and I believe Whānau Ora Commissioning Agencies have the best answer," he said.

The awards celebrate, recognise and reward individuals, providers and partners of Whānau Ora from all sectors for their outstanding contribution to the Pasifika Whānau Ora work.

The 2015 awards were characterised by innovative thinking and whānau focus.

Mrs Debbie Sorensen, Pasifika Futures Chief Executive says the awards recognise that without the efforts and dedication of Whānau Ora providers, partners, funders and sponsors the Pacific Whānau Ora work would not have been possible.

"We are passionate about recognising and rewarding the efforts of individuals and our partner organisations, and celebrating the outstanding contributions many have made to ensure better outcomes for our Pacific families in New Zealand," says Mrs Sorensen.