Whenua at three sites in Ngāruawāhia were blessed and had the sod turned last Friday, marking the start of construction for three new papakāinga in Waikato.

The morning began with the Mary Roberts and Kotahi Roberts Trust whānau, who had a 20-year dream of returning to live on their ancestral whenua.

Whānau were moved to tears as Associate Minister for Māori Development, Hon Nanaia Mahuta broke ground on the whenua where their papakāinga will soon sit.

Te Puni Kōkiri supported the Trust with $464,079 for infrastructure and capital build costs to develop one large whare, equivalent to two one-bedroom and one two-bedroom homes.

Next up, Minister Mahuta visited whānau from the Taawhia Te Ao Papakāinga Trust who were building three new affordable rental homes on their ancestral whenua. 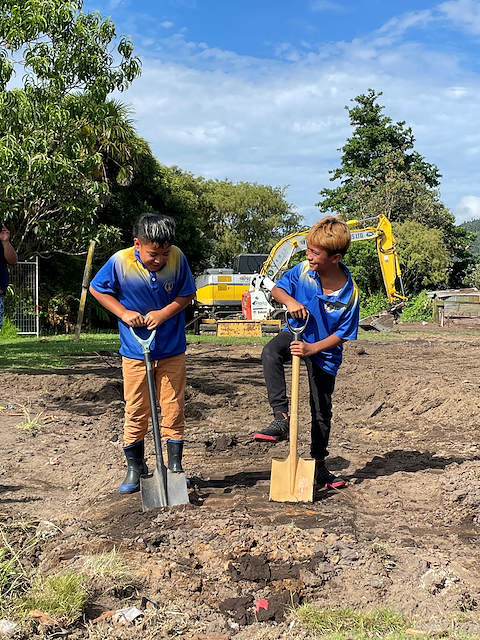 Aaria Tupaea and Te Oranga Herangi from the whānau of the Taawhia Te Ao Papakāinga Trust.

Whānau spokesperson Matutaera Herangi said creating a papakāinga was about fulfilling the aspirations of their tūpuna.

“What we are creating is a place for us to contribute to one another for generations to come, and a place for us to discover and create our own mana motuhake, our own self determination and sense of independence.”

The morning wrapped up on River Rd, where the Pareaute Epaapara Ahu Whenua Trust turned the sod on their whenua where their papakāinga will soon sit.

The trust received $1,208,725 to support infrastructure and building costs to develop four kaumatua rental whare. The whānau had also ensured additional infrastructure will also support stage two of their papakāinga in the future.