The celebration of the completion of stage two of the papakāinga development marks a significant milestone for the descendants of the original landowners who will get to live in the papakāinga homes their tipuna fought for decades ago.

A view of the new homes completed as a part of the 18 home papakāinga development at Pūkaki Trust papakāinga in Māngere, Auckland.

Minister Flavell attended the Pūkaki Papakāinga celebration in Auckland along with Senior Advisor Aroha Harris, and Senior Advisor Robert MacBeth. Te Puni Kōkiri through the Māori Housing Network assisted the whānau to set up their papakāinga on their tribal lands.

During his speech the Minister acknowledged that the celebration was not just for building homes, but the affirmation of ahi kaa.

“Through the development of this papakāinga you have returned, permanently, and bring with you your mokopuna and tamariki. They will grow up here, play with their cousins and muddy their clothes with the dirt from their own whenua. I acknowledge your past today and commend your commitment to all that you are achieving for your futures”, said Minister Flavell.

At the heart of the Pūkaki papakāinga housing project is the alienation of a whānau from their tupuna whenua and marae papakāinga at Pūkaki.

“My goal would be, and I hope my children and mokos will be, to make those lands come back in under us and the marae. Kia ora tātou.”

Six years after sharing those words in her whānau wānanga, Waikato – Waiohua rūruhi and family matriarch Donna Puao Rauwhero Richards has brought her family back to Pūkaki to live on the papakāinga in the first of the three newly built homes being opened in Auckland. 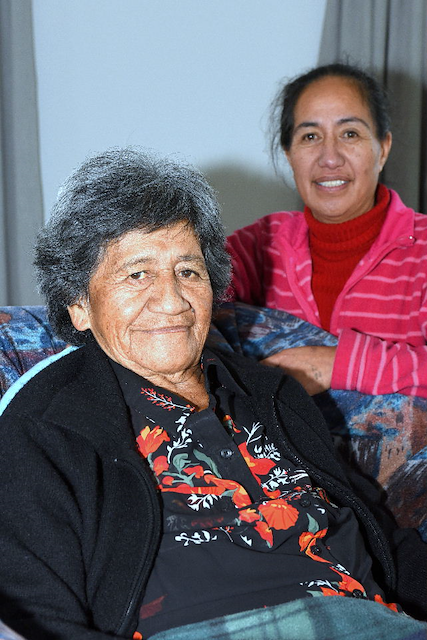 “Our parents’ generation wanted to revive and rebuild the community and, together with our tribal organisations, have done a lot of work to get us to the point where we could build on the papakāinga. We honour their aspirations to “bring our children and our grandchildren back here to nurture our whenua and our marae,” says project coordinator Stephanie Wade. “In turn, they will be nurtured by their tūrangawaewae and their whakapapa.”

Despite legislative restrictions, such as the airport protection zone of the 1950s and 1960s  that forced the abandonment once again of the marae and surrounding papakāinga lands,  whānau would still come home and camp on the land in tents, make-shift shelters and caravans.

In 1985, the Pūkaki Trust was established as an Ahu Whenua Trust to administer the land. Five trustees were appointed to represent the Clark, Marshall and Rauwhero whānau – descendants of the tupuna whaea and original owner, Māhia Takaanini (Reremoana Te Māhia Rauwhero).

“We were always on the land. We just weren’t in warm, safe, comfortable homes,” says Stephanie. “It’s wonderful to know we’ve created something that has real value for our kaumātua and tamariki and its bringing our community back together again”.

The papakāinga project has drawn on the support, input and passion of a range of Crown agencies, individuals, and community organisations including Habitat for Humanity Greater Auckland, the New Zealand Housing Foundation, Auckland Council, and Te Puni Kōkiri.

“We’ve been working with Te Puni Kōkiri for (the past seven) years to help build this papakāinga and have learnt a lot throughout the process,” says Stephanie.

“Working with them allowed us to build our capability. In stage two, we’ve taken more of a lead role in project management. We’re able to prepare our whānau to take on home ownership including financial literacy workshops”.

Te Puni Kōkiri helped the Trust facilitate between the myriad of government and private sector organisations with an interest in the project, and help the Trust ensure its decisions were in line with owners’ aspirations.

Donna Puao Rauwhero Richards, now lives in one of the new homes and is grateful for the support to build the homes.

“We were given a home to put on the land but the dwelling was not up to standard. An option was to renovate the house but instead we went with the home offered through the Trust.”

“Now we have a beautiful view overlooking the awa. It’s really warm, insulated and meets all of our needs.”

“Being here I can pass on the history to our mokopuna. I take them down to the awa to get what kaimoana we can and to teach them how to get kaimoana from the awa.”

Donna’s daughter Hannah Rountree, her husband Danny and their son Thomas live in the four bedroom home with her.

Support from the Māori Housing Network led by Te Puni Kōkiri was used to support the Pūkaki Trust papakāinga development.

Stephanie says the Trust are aiming to get the project into stage three by 2017 to build the remaining eight homes.

“We can call on the contractors we’ve worked with in the past, we now know what we need to do and the steps required to do that through working on the previous stages of the papakāinga development,” says Stephanie.