“It was very emotional, as emotional as I get. Most people from the outside probably wouldn’t be able to see that. But I was happy. Very happy.”

As the chair of Māori Development Minister Te Ururoa Flavell’s independent expert advisory group, Rawinia (Ngāi Tūhoe) lived with the legislation for nearly 18 months, travelling the country to consult with iwi Māori to ensure the bill was fit for purpose, and then recommending a new model, Te Whare o te Reo Mauriora, in which the Crown and Māori share the responsibility for the revitalisation of te reo Māori. After Cabinet and the Māori Affairs Committee adopted the bulk of the advisory group’s recommendations, Rawinia continued her engagement with iwi Māori so they were well positioned to select members of the new organisation Te Mātāwai once the bill had passed. Rawinia knew the passing of the bill was only one step, and now the challenge was to use this new structure for the betterment of te reo.

“One of the great opportunities of the new act is the ability to focus in on micro language planning through Te Mātāwai,” Rawinia says.

“It allows our people to take some leadership in the way they want to develop language strategies, and also for the Crown to support that through the Maihi Karauna and try to raise the consciousness and awareness of te reo Māori as part of our nation’s landscape.”

Next month her work on the bill will be honoured by Victoria University where she’s headed Te Kawa a Māui – School of Māori Studies, and been Assistant Vice Chancellor Māori Research since 2014, and is the newly appointed Deputy Vice-Chancellor (Māori). She will receive one of two engagement awards at this year’s staff excellence awards.

Rawinia’s own Māori-language journey started as a child, growing up in Wellington, but largely immersed in her Tūhoe ki Pōneke whānau.

“Mum’s generation always spoke te reo, so I was always aware that te reo was spoken.   Actually, I thought all Māori spoke Māori like my mother.”

Gradually she became more conscious that while she got the gist, when her aunties and uncles were talking, she didn’t fully understand te reo Māori.

“My point of consciousness around te reo Māori was a determination to want to learn te reo. We used to go to Ruātoki a lot, and everyone spoke Māori, and I felt that I was missing out, not being able to fully understand.  So when I was 11, I asked my parents to let me go live with my kuia, Te Uru McGarvey, and I went to school at Ruātoki.”

Ruātoki School, officially the first bilingual school in the country, was in reality a full-immersion school, and Rawinia found herself in the unusual position of being in a remedial class for those who needed to learn how to speak Māori.

“My cousins have often teased me about being in the remedial class and now I’m a Māori Studies Professor.” 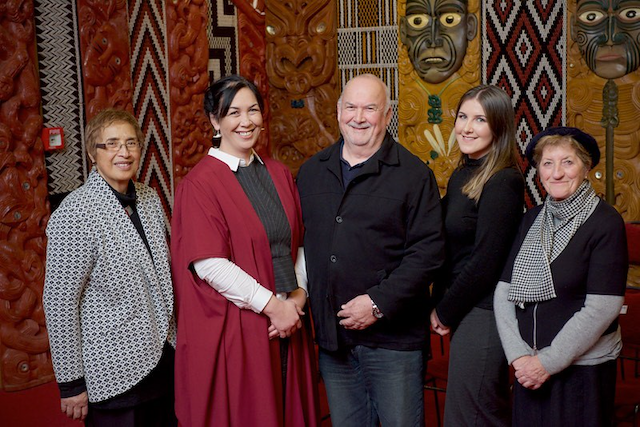 A Māori Studies Professor who has built up an impressive body of research around te reo Māori, and specifically, its normalisation.

“As the numbers show, Māori people live mostly outside of the language, and choose not to see the relevance of the language to themselves, because it appears to lack any relevance to society,” she said in her inaugural professorial lecture delivered last year.

“We must be cautious not to allow the marae to become the museum that houses our language. The majority of Māori no longer live at marae with permanence.”

She wants all New Zealanders to embrace the language, and believes the new act provides the structure that will encourage more positive attitudes towards te reo Māori through greater visibility. Rawinia encourages everyone to be a champion of te reo Māori in their whānau and communities.

“I remember going to get some petrol in Whakatāne, and a non-Māori person told me how much my petrol was in te reo Māori. He didn’t say it very fast, he was still learning, but he had taken the opportunity to practise. I was really quite moved by that. We should be supporting this kind of approach to encourage people to speak te reo.”