Over $10,000 has been raised in t-shirt sales to support Kaikōura businesses following the 7.8 magnitude earthquake that struck the region on 14 November. 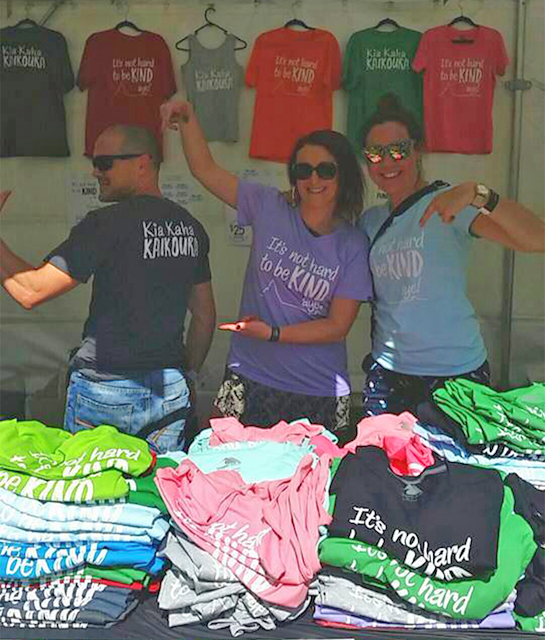 The t-shirts, made by Christchurch based screen printer Gooses, feature the words “It’s not hard to be kind, aye” on the front, a phrase from a One News story that got over 400,000 views following the Kaikōura earthquake.

It all started when Jeff Reardon (Ngāti Kurī, Ngāi Tahu) showed up to a local park by Takahanga Marae in Kaikōura with a koha of kaimoana. The park had become a haven for overseas tourists and those seeking higher ground after tsunami warnings had been issued. People were more than a little surprised to be eating delicacies such as crayfish following such a frightening event and when asked the motivation for his generosity Jeff simply replied, “It’s not hard to be kind, aye.” Jeff and has wife Carol had moved to Kaikōura after losing their own home in the 2010/11 earthquakes in Christchurch.

Watching anxiously in Christchurch for updates about their parents, Jeff’s children Kori and Leiani were relieved when they saw they were okay. Relief soon turned to amazement at the amount of views the One News clip had. “We were just sitting there watching it all on TV and then saw all these views on Dad’s news interview and heaps of comments online,” says Leiani who was about to fly out of Christchurch for her honeymoon when the 2010 quake struck. “We were wondering what we could do to help. Kori came up with the idea of t-shirts and the next day he contacted Gooses screen printing company and they were 100% keen.”

Since then, Jeff’s small act of kindness has turned in to quite the popular fundraiser. A Facebook page was set up and orders have come in from as far away as Germany. “It’s been really fun,” says Leiani whose living room has been a packing and distribution centre for the past few weeks. “We didn’t realise how popular the t-shirts were going to be.” The pair were offered a free table at a local Six60 concert earthquake fundraiser where they sold over 150 t-shirts inscribed with Jeff’s humble phrase and the words “Kia kaha Kaikōura” on the back.

While Leiani and Kori (who also lost his brand new home in the 2010/11 quakes) have been putting in plenty of hours they are full of praise for the generosity of Gooses screen printing. “The staff at Gooses have been amazing. They’ve been sourcing the t-shirts and printing them for free.”

Jeff’s kind koha of kaimoana was originally tagged for his wife Carol’s 60th birthday due to be held the weekend following the earthquake. The family has decided to celebrate Carol’s birthday at Christmas time instead. This will be the first time their whānau has been together since the Kaikōura quake. “We had whānau and friends coming from all over so it was disappointing we didn’t get to celebrate Mum’s birthday together,” says Leiani. “I can’t wait to get together at Christmas. So much has happened since Dad’s little TV interview and we’ve got heaps of catching up to do.”

Gooses is now taking orders for the t-shirts through their website.