6. What Are Out of School Services?

This research focuses on out of school services and care that Māori want and/or are able to access for their children. These services may be provided by service providers and includes care given by whānau. The services are provided out of school hours which includes hours before school, after school and during school holidays.

Figure 1 – Descriptions of out of school services 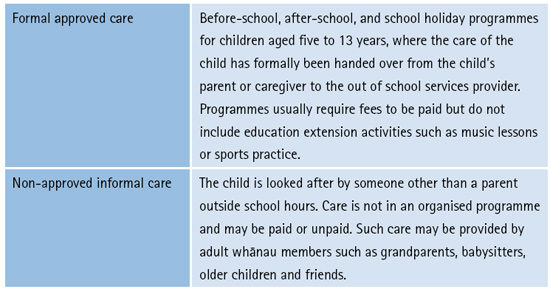 Before-school, after-school, and school holiday programmes for children aged five to 13 years, where the care of the child has formally been handed over from the child’s parent or caregiver to the out of school services provider. Programmes usually require fees to be paid but do not include education extension activities such as music lessons or sports practice.

The child is looked after by someone other than a parent outside school hours. Care is not in an organised programme and may be paid or unpaid. Such care may be provided by adult whānau members such as grandparents, babysitters, older children and friends.

The terms, approved and non-approved care (rather than their descriptions) created some confusion with parents and caregivers. They said that approvals for care come from them as to whether their children attend out of school services with a service provider or are cared for by whānau. Throughout the interviews and focus groups, they used the terms formal care (as provided by service providers) and informal care (as provided by whānau carers, such as whānau members, friends and others) rather than approved formal and non-approved informal care. 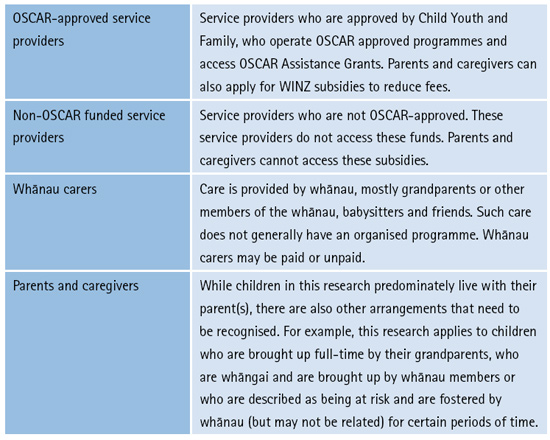 Service providers who are approved by Child Youth and Family, who operate OSCAR approved programmes and access OSCAR Assistance Grants. Parents and caregivers can also apply for WINZ subsidies to reduce fees.

Care is provided by whānau, mostly grandparents or other members of the whānau, babysitters and friends. Such care does not generally have an organised programme. Whānau carers may be paid or unpaid.

While children in this research predominately live with their parent(s), there are also other arrangements that need to be recognised. For example, this research applies to children who are brought up full-time by their grandparents, who are whāngai and are brought up by whānau members or who are described as being at risk and are fostered by whānau (but may not be related) for certain periods of time.