Education has an inﬂuence on other aspects of wellbeing beyond employment and income. One such area is health. Māori with higher levels of qualiﬁcations were more likely to live longer over the period of 2001 to 2004. Mortality rates`6 measure the number of deaths in a population, providing a useful indicator of health that is directly related to life expectancy. Mortality rates among Māori were higher for males than females, but both males and females with higher levels of qualiﬁcations had signiﬁcantly lower mortality rates.

Graph 3: Māori Mortality Rates by the Highest Qualification Attained from 2001 to 2004 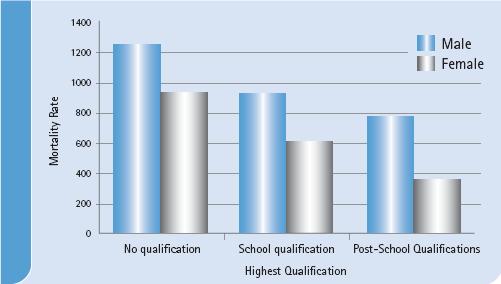