Recent performance and areas of strength

How has New Zealand done?

In 2008, the Government set its goal to increase exports to 40 percent of GDP. At that time, New Zealand’s exports were 30 percent of GDP, or $17.8 billion below the target level. Global trade felt the full impact of the global recession the following year. The OECD reports that global trade fell 12.5 percent in 2009.5 New Zealand’s exports were affected but recovered in 2010 to nearly the same value as in 2008.6 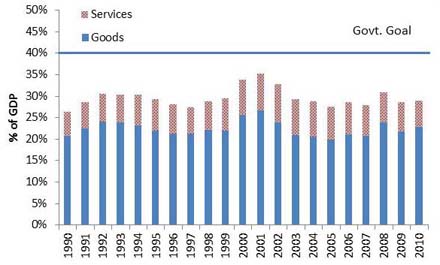