The Government is developing a whole-of-government approach to address the issues raised by the vast Wai 262 claim and the Waitangi Tribunal report, Ko Aotearoa Tēnei. 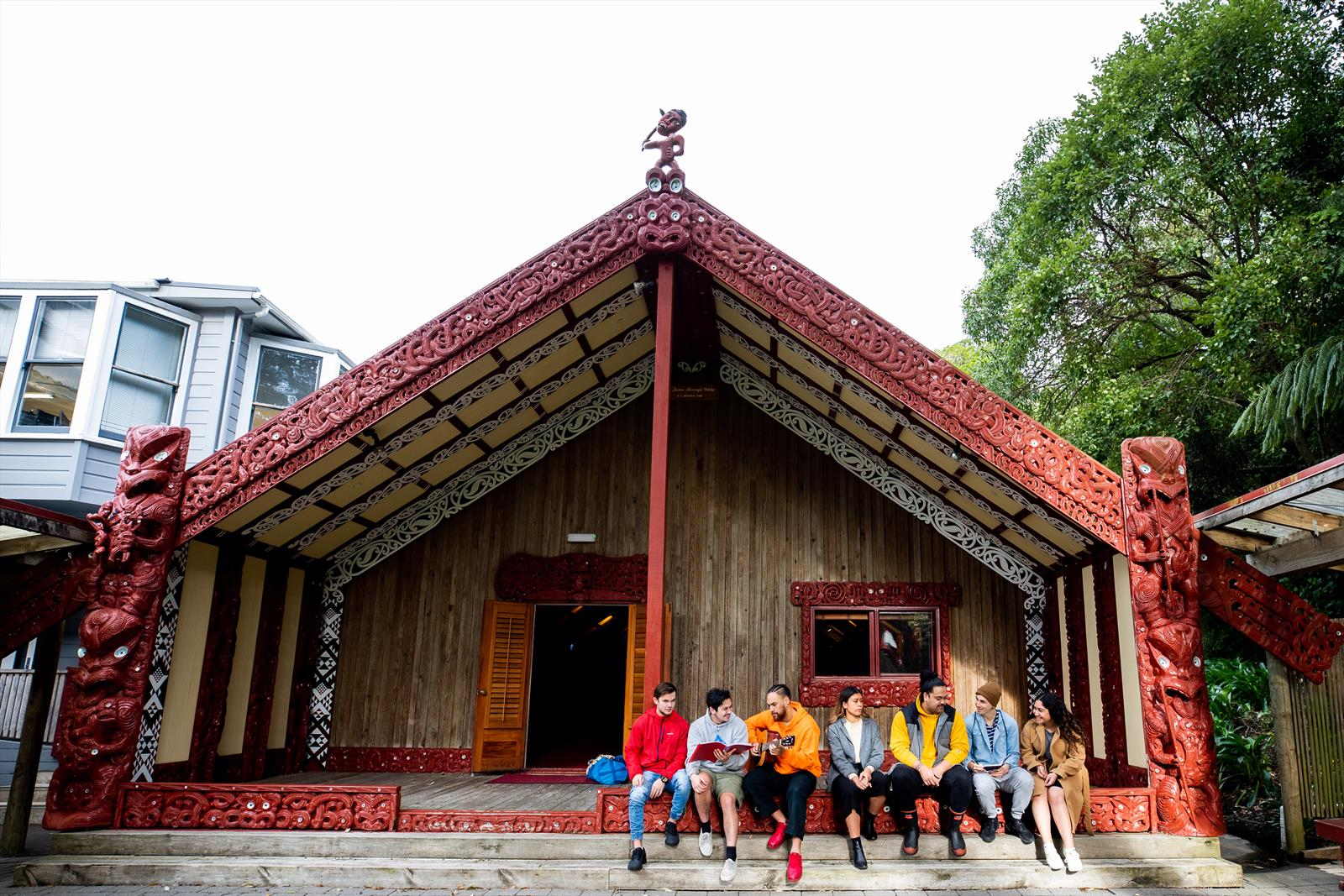 The contemporary Wai 262 claim considered who is entitled to make or participate in decisions affecting indigenous flora and fauna, the environment, Māori culture and the products of Māori culture. The accompanying Ko Aotearoa Tēnei report discusses many of these kaupapa and lays down a wero for the Crown and Māori to advance their relationship as Treaty partners in a positive and future-focussed way

A whole-of-government response to Wai 262 provides an opportunity to renew how we work effectively for all New Zealander’s to build an even better New Zealand we can all be proud of. This work has the potential to fuel innovation, strengthen national identity, and enhance our international reputation, as well as deliver direct benefits to Māori.

Next steps for Māori and the Crown

Budget 2020 allocated $6.5m over two years to support the initial stages of the Te Pae Tawhiti - Wai 262 work programme. This will enable Māori and the Crown to start work together to address issues raised through the Wai 262 claim and Ko Aotearoa Tēnei, delivering enduring economic, social, environmental, and cultural benefits for Aotearoa New Zealand.

In August 2020, The Minister for Māori Development agreed to the next steps that Te Puni Kōkiri will focus on for the Wai 262 work programme. This will include:

Key areas of work identified so far include:

Te Puni Kōkiri is closely working with Te Taumata Whakapūmau, the original Wai 262 claimants representative rōpū. The Minister for Māori Development has recognised that Te Taumata Whakapūmau play a kaitiaki role to ensure the integrity of the overall process in the establishment stage of joint work between Māori and the Crown.

The claim was a ‘contemporary’ claim. It focused mainly on the Crown’s existing laws, policies and practices instead of the Crown’s historical actions. The claim related to:

te tino rangatiratanga o te Iwi Māori in respect of indigenous flora and fauna me ō rātou taonga katoa (and all their treasures) including but not limited to mātauranga, whakairo, wāhi tapu, biodiversity, genetics, Māori symbols and designs and their use and development and associated indigenous cultural and customary heritage rights in relation to such taonga.

What did ‘taonga’ mean for the claimants?

For the claimants, ‘taonga’ encompassed all of the elements of a tribal group’s estate, ‘material and non-material, tangible and intangible’. They argued that tino rangatiratanga incorporated:

The Tribunal has said that the objective of many of the proposed reforms was to establish genuine partnerships – including through the creation of new partnership bodies – in which the interests of Māori and other New Zealanders are fairly and transparently balanced.

The Government has decided to develop a whole-of-government approach to consider the issues raised by claimants and the Waitangi Tribunal in the Wai 262 inquiry.

Why the Government is doing this work

This Government recognises the time is right to discuss the long, outstanding issues raised by Wai 262 and Ko Aotearoa Tēnei.

An all-of-Government approach is needed to progress this kaupapa, which is an important part of strengthening the Māori-Crown relationship and for New Zealand as a nation.

This Government is focused on building an economy, community and services where Māori are able to lift their own wellbeing and reach their goals and aspirations – whether they are in education, health, employment, enterprise or kaitiakitanga.

Ko Aotearoa Tēnei is a pivotal report that highlights the opportunities and challenges we face as we move into a post-settlement era. The issues raised in the Wai 262 inquiry have also been raised frequently by Māori elsewhere, like in Treaty settlements, legislative reviews and other domestic forums. Many Māori have also raised the issues in international forums.

This Government considers that it’s time to take a more deliberate and coordinated approach to these issues. We’re picking up the wero laid by the Waitangi Tribunal for the Crown and Māori to come together and form new working relationships for the 21st Century. The work will contribute to the wider conversation about who we are as a nation, and who we want to be.

Feedback to Te Puni Kōkiri on the targeted engagement was cautiously positive about the proposed Crown structure. Most saw this process as an important first step, and an opportunity to refocus the relationship between Māori and the Crown, using the Wai 262: Te Pae Tawhiti work as a vehicle for working collaboratively together on what can be achieved.

Others said they wanted more time to engage and think about their specific issues before they could respond effectively.

You can read a copy of the Wai 262: Te Pae Tawhiti – targeted engagement report here. As the report Ko Aotearoa Tēnei states, Wai 262 offers us a meaningful opportunity to take a different approach and work more effectively as government.

For this country to thrive economically and experience an increase in wellbeing, we need to work with iwi Māori to better protect taonga species, taonga works and indigenous knowledge (mātauranga Māori) to recognise and leverage their use in a manner that supports Māori aspirations.

This requires shared understanding about the value and uniqueness of where we have come from so we can work collaboratively together. A collaborative approach is all the more relevant in the current COVID-19 recovery context.

The overall work programme is likely to involve a number of Government Ministers and agencies coming together to work alongside each other, Māori and the wider public over a number of years. The exact scope, phasing and timing of the work is still to be worked through.

How the Government is organising itself

At this stage the Government intends to organise itself around three broad kete of issues. The names for the kete or baskets draw on key terms that feature in the Ko Aotearoa Tēnei report.

Potential work programme for each kete 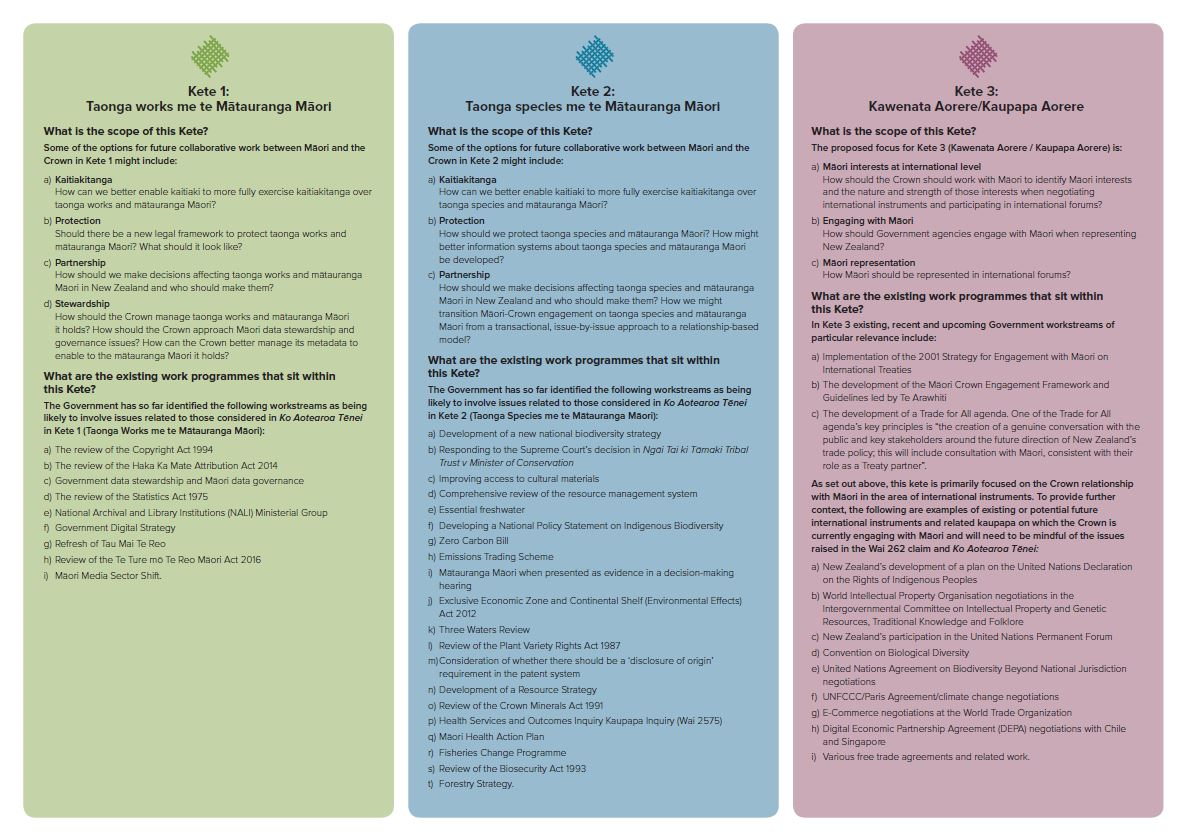 Why has it taken the Crown so long to respond?

This Government considers that too little has been done since the report was issued. We are committed to making progress on the issues raised in the inquiry and the report.

Hon Nanaia Mahuta’s 2018 Section 8I Report on the Crown’s progress implementing Waitangi Tribunal recommendations contained a feature section on the Wai 262 report. It provided a brief summary of the Waitangi Tribunal’s recommendations and what the Crown has done since it was released. The Section 8I Report showed clearly that more needs to be done in this area and this Government is committed making that happen.